The agate is a volcanic rock that is part of the metamorphic rock family. It is of a cryptocryastalline variety of silica and often contains bands or ribs of bright colors. This agate is white mottled and contains quartz. Agate was commonly used as a leather burnishing tool in the early 20th century and in buildings. As Grand Rapids was the Furniture City, agate would have enabled the furniture manufacturers to smooth and polish the edges of their leather to create a glossy look for their furniture upholstery. Buildings would also have utilized this rock to beautify their countertops and floors.

L Is For Lyceum - Fluorescent Minerals (December 22 2016 – December 31 2017)
In the ancient world, the lyceum was where the greatest Greek philosophers taught. The concept of the lyceum was revived by American intellectuals in the 19th century who believed that public education was an important part of our democracy. Founded in 1854, the Grand Rapids Public Museum was originally named the Grand Rapids Lyceum of Natural History. In 2015 the Grand Rapids Public Museum School was founded with many community partners. The Museum School has developed its own version of the lyceum - an innovative after-school program that pairs local experts with middle school learners to exercise their minds and bodies by exploring an eclectic range of topics. 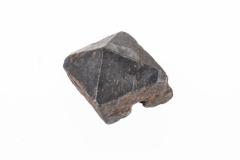