Dorothy's father Charles was one of the earliest Swedish immigrants to West Michigan. He owned and operated Lindberg Gun Shop at 19 Pearl Street and had 10 children, several of whom went into business with him.

Lindberg Gun Shop
Swedish immigrant Charles Lindberg opened the Lindberg Gun Shop shortly after he arrived in Grand Rapids in 1865. According to the Polk directory in 1900, Lindberg operated his business at 19 Pearl Street. The site is now the location of the magnificent Woodbridge N. Ferris Building, home of Kendall College of Art and Designs Federal Galleries. Another advertisement also lists his business as located at the corner of Bridge Street and Turner Avenue on the city's West Side. Another Polk directory from 1898 lists the address near the corner of Commerce and Fulton in the Kortlander Building. Lindberg's guns were well known for their quality and remain collectors items today.

Lindberg's sons, Oscar and William joined the business 1880's. The shop specialized in guns, ammunition, sporting goods and locks. Lindberg himself died in 1908. A large collection of artifacts he used in his shop were donated to the Museum by his daughters, Mrs. Thomas Vidro (Dorothy Lindberg) and Anna Lindberg. His shop was used to inspire the gun shop featured in the Streets of Old Grand Rapids exhibit at the Van Andel Museum Center and several artifacts collected from his shop are featured in that exhibit.

Mr. Charles J. Lindberg
Born in Sweden on May 6th of 1839, Charles Lindberg immigrated to Grand Rapids in 1865. His obituary notes him as one of the earliest Swedish immigrants to West Michigan. He became successful as a gun smith and as the owner of Lindberg Gun Shop at 19 Pearl Street. He had 10 children, several of whom went into business with their father. On May 27, 1908, weeks after his 69th birthday, he passed away and was interred at Greenwood Cemetery in Grand Rapids. Artifacts collected from the Lindberg Gun Shop were donated to the Museum by Charles' children in the 1960's. 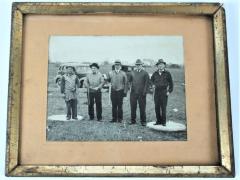