Archival Collection #047 - Wm. A.  Berkey Furniture Co. consists of papers relative to the formation of the Wm. A Berkey Furniture Company. The collection include: articles of association, minutes of stockholders, directors meetings check register of blank checks and original stock certificates. The collection contains a small grouping of materials that span the years 1861-1940. The company was highly successful in the manufacturing of tables and upholstered furniture beginning in 1882 in Grand Rapids. The company was dissolved as a corporation on or about July 26, 1950. It was purchased by John Widdicomb and became a division of that company.  This collection provides insight into an important Grand Rapids manufacturing company as it relates to the rules and regulations of incorporation in the State of Michigan for that period in time, their finances and how they operated.


A full listing of the contents of this collection can be found in the finding aid that is attached to the media section of this catalog entry.

Gift Of Green, Mrs. Lewis A.

COMPANY HISTORY
1859: William A. Berkey manufactures window sashes and doors for building construction.
1882: After years as a director of various other furniture companies, Berkey opens his own factory.
1885: Company incorporates as William A. Berkey Furniture Co.
1950: Company is purchased but continues to operate as a division of John Widdicomb Co.
1976: Company ceases to operate as a separate division.

PERSONNEL
William A. Berkey spent years as a part owner of Berkey Brothers & Co. and the Phoenix Furniture Co. before he severed his ties to furniture making in 1863. But in 1882 he returned to furniture, with the organization of his own company. He served as his company’s president until his death, when he was succeeded by his son-in-law W.H. Jones. He, in turn was succeeded as head of the company by his son, E. Berkey Jones. He ran the company until it was purchased by Lewis T. Peck and A.G. Green in 1940. In 1950 ownership of the company passed to the John Widdicomb Co.

PRODUCTS
The first products of the William A. Berkey Furniture Co. were fine- and medium-grade wood-top center tables in native oak, ash, maple, and “bay wood”. By 1886 the factory was producing 20,000 tables and pedestals a year. By the 1890s its line had expanded considerably, to include upholstered parlor furniture and fancy cabinets. Its offerings for the parlor included fancy chairs and rockers, couches, rattan chairs and rockers, and center tables. By 1900, William A. Berkey was offering dressers, chiffonniers, bookcases, parlor and music cabinets, and library, work, toilet, and bedroom tables, mostly in mahogany.
In the 1910s and ‘20s William A. Berkey Furniture Co. established itself as a producer of mahogany period revival furniture for the dining room, library and living room in various American Colonial and 18th-century European styles, including Empire, Jacobean, Oriental lacquer, Adam, Sheraton, Hepplewhite, and Chippendale. During the 1930s the company manufactured mostly tables, as well as some desks and secretaries, corner china cabinets, bookcases, chests of drawers, highboys and lowboys, dining room suites, and a few bedroom pieces, in mahogany only.
Beginning in the 1950s the company began producing furniture to complement John Widdicomb Co.’s other lines. A William A. Berkey catalog circa 1972 shows the “Interlude” line of bedroom furniture in matching French poplar veneers, and the “Beta Group” of contemporary bedroom and dining room furniture. Both were nearly identical in styling to the “Wellington Group” produced by Berkey’s parent company, John Widdicomb.

OTHER SOURCES
An archival collection relating to the formation of the William A. Berkey Furniture Co. is in the collections of the Grand Rapids Public Museum. 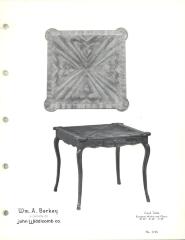 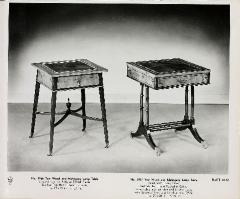