This Ku Klux Klan ensemble, sometimes referred to as a glory suit by Klansmen, consists of three pieces that include a robe, hood, and carrying bag. The ankle-length robe is made of white cotton and has long straight sleeves. There is a cape attached to the neckline that falls to the back waistline and it has a two-ply cord around the waist that is attached at the back. Five mother-of-pearl buttons can be seen down the center front and there is also a snap-on patch known as the Mystic Insignia of a Klansman (MIOAK) on the proper left side of the chest. This insignia, commonly referred to as the blood drop cross, is a round red circle with a white X and a blood drop in the center which is said to represent the blood shed by Jesus Christ at the Crucifixion. The hood is made of white cotton and is stiffened using oilcloth from the crown up. It also has eye holes and a red tassel made of yarn attached to the tip. This ensemble is accompanied by a black carrying bag with snap closures and the number "14" written in yellow.

This Ku Klux Klan ensemble was purchased by the donor with the intent to donate it to the Grand Rapids Public Museum. It was bought at a 1992 auction in Fremont, Michigan where a collection of 1920's Newaygo County Klan memorabilia was discovered in the attic of Ledford Anderson's farmhouse as it was being readied for an estate sale. In Anderson's youth, he was the treasurer of Klavern 29 which was the Newaygo Chapter of the Ku Klux Klan. The auction consisted of over 250 items which included numerous photographs, 39 robes, the framed charter of the Klan, and many more objects.

This ensemble is a powerful symbol of social intolerance and racial prejudice from one of our own communities in West Michigan. Its preservation is intended to educate others on the history of organized hate in America.

Donated so that the malice, hatred, and anger of history may not be forgotten, and in the hope that we will strive to live peaceably from this time forward, with love and understanding for all men. 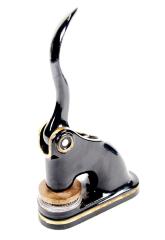