The exhibition display is incorrect. It was donated by "David M. Haney" not "Donald L. Haney". There is no, "Donald L. Haney" in the family. David was the same one who wrote the Haney Furniture Company history. This correction comes from Rebecca Haney, daughter of David M. Haney who visted the Furniture Exhibition today (12/24/16) at the musuem.Jim Winslow, 12/24/2016

The Haney School Desk was indeed donated by Donald L Haney. I watched him and my brother Tom refurbish this school desk for the donation. Donald is the son of the owner George F Haney for whom the exhibit was honors. Donald is also the grandson of the founder, Elijah, of Haney School Furniture. I was at the opening of the Museum and the exhibit in 1994 when the desk was donated. David Haney did write Haney School Furniture Company history in the 1970s.. David Haney was a teacher in Grand Rapids. I know this because I had him as a teacher for a year. Donald Haney also wrote of Haney School furniture in the 1950s as a Masters Thesis for college. The History document has been perfected by Tom Haney who has spent years researching history. It is now several hundred pages long and is a wonderful document.John Haney, 6/15/2020

This combination desk was created by Haney School Furniture Company and has ornate black cast iron trestles on each side with four feet that can be bolted to the floor. The front features a curved backrest and a fold-down seat while the back has a surface that is used as the desk for the student sitting behind. The desktop and bench are made with distinctive Haney tongue and groove molded boards. Prior to donation, this desk was refurbished by Donald and Tom Haney.

This desk is featured on page 162 of Grand Rapids Furniture: The Story of America's Furniture City by Christian G. Carron, accession number 2020.1.33.

In Memory Of George F. Haney

PERSONNEL
Elijah Haney was the company’s founder and first president. An inventor and mechanic at heart, he initially had his foundry produce small agricultural implements. After switching to school furniture, he received patents for his improvements, which eventually became standard in that segment of the industry. Control of the company rested solidly in family hands, with Elijah as president, Ida Haney vice-president, Alberta Haney as secretary, and George M. Haney as treasurer. Elijah remained president until the company’s bankruptcy in 1919.
George M. Haney left the firm in 1912 because of disagreement over how the company was being managed, but restarted the bankrupt company after its original charter expired in 1922. Stricken with a sudden illness in 1923, George M. Haney was forced to turn over management to his wife Rose, and two sons Elijah William Melvin (Mel) Haney and George Francis (Fran) Haney. After George died in 1926, Rose served as president until her death in 1949. Fran succeeded his mother as president until the company was sold in 1966.
At that point control of the company for the first time moved out of the hands of the Haney family. It was purchased by Joseph Kiraly, formerly a sales representative for another company.

PRODUCTS
Although the legs, frames, and other parts were cast iron, the desktops and seats were fashioned from Michigan maple. Elijah’s automatic folding seat desk featured a fold-up seat in the front, and a writing surface in back. Each seated student used the writing surface attached to the desk unit in front of him or her. This innovation allowed for easy cleaning of floors and rearrangement of the desks. Its success was phenomenal. Haney produced 50,000 of the desks for the Chicago school district in 1893 alone, and sold millions more throughout the United States, Europe, South America, China, and India. As the company grew so did its product line, to include teachers’ desks, office desks, opera seating, and church seating.
In 1922 George M. Haney received a patent for his modernized “pedestal school desk”. It too featured a seat on the front of the unit, but it was mounted to a cylindrical pedestal that allowed for adjustment in the height of the seat. During World War II Haney produced desks for American military training centers.
After the war, light aluminum table and chair units with hard maple tops and chair backs were introduced. In 1960 “The Coloramic Line,” with freestanding desks and chairs in soft colors, went into production. “Coloramic” desks were constructed of tubular steel, with plastic over hard maple tops.
With the sale of the company in 1966 came changes in the product line to mostly library furnishings. With a heavy emphasis on metals and plastics, the new line included checkout desks, library tables, lecterns, study centers, book carts, and newspaper racks. An innovation for the classroom was the “Selectern,” a teacher’s desk with a pop-up lectern.

OTHER SOURCES
A detailed history of the company including a finding aid of papers relating to the company was compiled by descendant David Haney in an unpublished thesis in 1972.

MARKS AND LABELS
School desks made after 1889 were marked with “PAT’D SEPT 18, 1888/HANEY SCHOOL FURNITURE CO. GRAND RAPIDS, MICH.” cast on the side of the leg or trestle. Even if Haney produced a desk for another company and another name is stamped in the ironwork, you can tell it was actually produced by Haney if the tongue and groove joints between the boards in the seat form a zigzag pattern. During the period following WWII, the company trademark included the name Haney school furniture” in script, surrounded by a rectangular shape with concave sides. Pieces after 1966 will be marked simply “Haney” or “Haney Equipment Co.”

Donald L. Haney
Donald L. Haney is the son of George F. Haney and the grandson of Elijah Haney, founder of Haney School Furniture Company. In the 1950s, he wrote about Haney school furniture for his Masters Thesis. The document has since been edited by Tom Haney to include the company's full history. 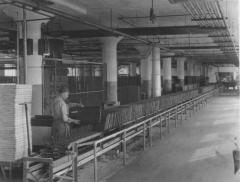 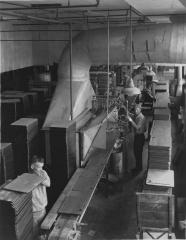