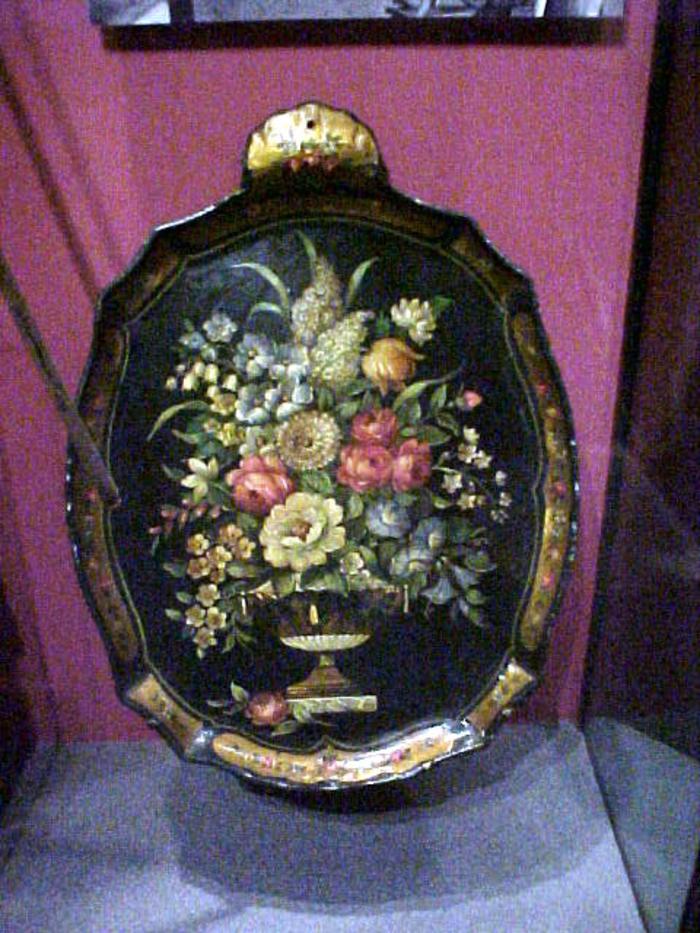 Black lacquered tray with painted floral bouquet in vase in center. Scalloped edge has gold borders with floral decorations. Short handle at one end with hole for hanging. Converted from Loan to Gift 9-4-2002.;This tray was made by Dolores DeMiller Davidhazy, a decorative painter at the Robert W. Irwin Furniture Co. in Grand Rapids. It can be used to interpret women's roles in the workplace, since decorative painting was considered to be one of the few furniture factory positions suited for women since it required an artistic disposition and manual dexterity. It is already in use in the permanent "Furniture City" exhibition.;This tray originally came as a loan from Frank C. Davidhazy, and was converted to a loan by his wife after his death.;This tray was hand painted by Dolores DeMiller Davidhazy, who was trained in painting in Chicago, and worked as a hand decorative painter of furniture at the Robert W. Irwin Furniture Co. At the time, this was one of the few jobs that was considered appropriate for women inside the furniture factory, because it required an artistic disposition and manual dexterity. Ms. DeMiller began at Irwin when she was single, and quit her job there after she married the head of the decorative painting department, Frank J. Davidhazy.

In Memory Of Frank C. Davidhazy

Margaret Davidhazy
Margaret Joanne McCarthy Davidhazy was born on April 4th, 1930 to Thomas and Irene McCarthy. She was married to Frank C. Davidhazy and passed away on December 20th, 2011.