This empty pharmaceutical bottle is made of glass and is labeled "Ammonium Chloride". It was manufactured by Parke, Davis, and Company and is from the Rudell Drug Store that operated in Sault Ste. Marie, Michigan from 1900 to 1969.

Parke-Davis
Parke-Davis, a subsidiary of the pharmaceutical company Pfizer, was founded in 1866 in Detroit, Michigan by Dr. Samuel P. Duffield. Originally founded as Parke, Davis, and Company, the business began with a partnership between Duffield, Hervey Coke Parke, and George S. Davis. It was one of the largest pharmaceutical companies in the world and had the first modern pharmaceutical laboratory. Over time the company named changed to Parke-Davis and in 1970 the business was acquired by Warner-Lambert which was later bought by Pfizer. 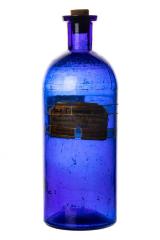 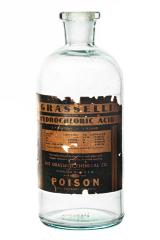