This felt fedora has a shag finish and an overwelt edge on the brim. There is a thick hat band around the base of the crown and this hat has a center dent bash. The sweatband is made of leather and has two labels printed in gold on it. One is from Dunlap & Co. and the other is from Mackenzie, Bostock, Monroe of Grand Rapids. The interior silk lining also features a label from Dunlap & Co.. This hat was stored in a Stetson box and was worn by a member of the Voigt family of Grand Rapids, Michigan.

Mackenzie, Bostock, Monroe Company
Mackenzie, Bostock, Monroe Company was a retailer based on Monroe Ave in Grand Rapids. Early records show the company was in operation as early as 1912 and was registered in Grand Rapids until at least 1986. They were known for their quality clothing, neckties, menswear, hats, and furniture. The original President was C.W. Monroe, the Vice President was M.W. Mackenzie, and the Secretary and Treasurer was F. G. Bostak. 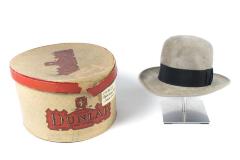 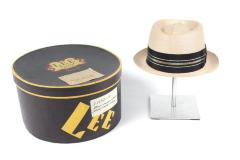 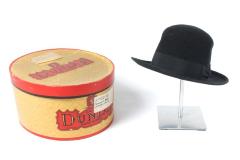