This folding chair is featured on page 99 of Grand Rapids Furniture: The Story of America's Furniture City by Christian G. Carron, accession number 2020.1.33.

PERSONNEL
Throughout most of its history, American Seating has been served by presidents of unusual longevity, most notably Thomas Boyd (1906-1929, and H. M. Talliaferro (1929-1958).  Probably the names most associated with American Seating were the master carvers in its Church Division. Alois Lang, who learned woodcarving in his hometown of Oberammergau, Bavaria, began in the American School Furniture Company carving studios in 1902. Joseph F. Wolters, who began as an apprentice carver in Germany, came to American Seating’s Church Division in 1923. Both were known for their carved statuary, plaques, and architectural details, including “Last Supper” altarpieces, memorials, and special commissions that grace many churches and public buildings throughout West Michigan and the nation.

PRODUCTS
Since it began with the union of nineteen varied companies, American Seating always operated with multiple divisions and plants, and several lines of products. In its early years, the company produced school desks, church pews, and opera or theater seating. At different times it added stadium bleachers, folding chairs, transportation seating, and hospital and office furniture to that list. Most Americans have at some point sat in an American Seating product.

SCHOOL PRODUCTS
American Seating inherited production of the wood and cast iron “Combination” chair/desk from Grand Rapids School Furniture Company. In 1911, an updated Combination known as the “101” made use of tubular steel. Other models introduced such features as adjustable height, swivel seats, and bases that didn’t need to be bolted to the floor. All of these elements were incorporated into the 1921 “Universal,” which was scientifically designed to promote good posture, and stayed in production for decades.  Post-World War II designs made use of new materials such as plywood, plastic, and plastic laminate.

SEATING PRODUCTS
Various wooden folding chairs for bridge tables or meeting halls were replaced in 1930 by the “Folding Forty” chair and its successors. More than five million of these were made for the armed forces during World War II alone, and millions more are in use every day throughout the world.

OFFICE PRODUCTS
While American Seating had long been making seating for public use, directories first list open office plan furniture among the company’s products in 1973. Some concentration was placed on specialty offices in factories or laboratories, for which they already produced more conventional furniture.

STADIUM AND THEATER PRODUCTS
The plywood and cast iron opera seats made by their predecessors were replaced by more opulent, upholstered seats with elaborate Rococo decorations for the motion picture palaces of the 1920s. Streamlined designs culminated in the 1938 “Bodiform” chair, which required two years of research and testing. Notable installations of various lines can be found a Radio City Music Hall and Lincoln Center in New York, and the United States Senate and House Galleries in Washington, D.C. Although American Seating first listed stadium seating among its products in 1951, it today boasts that most major league ballparks in the country, including the Houston Astrodome, Denver’s Mile High Stadium, and Baltimore’s Camden Yards, are outfitted with its products.

TRANSPORTATION PRODUCTS
The first all-tubular steel-framed seat for use in city buses was introduced in 1931. From that beginning, American Seating’s Transportation Division expanded to claim a 90% market share by1998. Their products included seating for cross-country buses, subways, and mass-transit systems, and driver’s seats for trucks and locomotives. Larger clients have included the San Francisco Bay Area Transit System and the New York City Transit Authority.

CHURCH PRODUCTS
The Church Division, which was consolidated from other plants to Grand Rapids in 1927, provided a wide range of architectural and furniture designs, pews, altars, and special carvings for church interiors. Grand Rapids city directories last list the Church Division in 1969.

MARKS AND LABELS
Grand Rapids School Furniture Company desks carried a casting of the company name and sometimes a “GRSFCo” monogram on the leg trestles. A scrolled monogram “ASCo” surrounded by a circle served as American Seating’s early logo. In 1930, the company began to literally brand or wood-burn a “lamp of knowledge” to wooden desks.  This was replaced in 1956 by an impressionistic row of chair seats called the “modern chair row,” which was applied or molded onto all products. In the 1970s, the company logo was simply the sans-serif letters “Am Se Co”.  In the 1980s, the company used a square with rounded corners, surrounding a single line bent to represent a seat.  By the 1990s, the trademark had changed to a five-point star surrounding a stylized “S”. 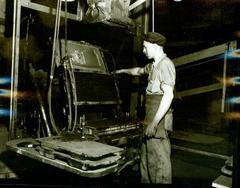 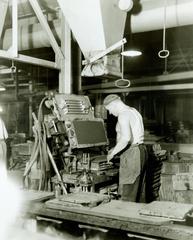 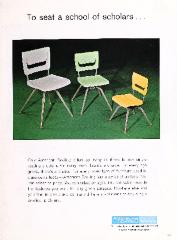 Brochure, American Seating Co., To seat a school of scholars... 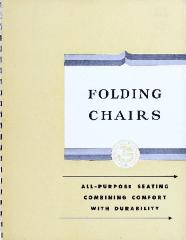