Wooden shabti figure standing with arms crossed in front and wearing a nemes headdress. Figure appears to be holding flails.

Ancient Egyptians believed life after death was similar to life before death...only better. Crops would grow taller, the sun would always shine, and when one was called up for duty in the field another would generally act as a substitute. This belief is perhaps best exemplified through the  shabti figures that were placed in tombs to magically perform laborious tasks for their owner in the afterlife.

The appearance of shabtis changed through time. Whenshabtis were first made around 2100 B.C.E., a singleshabti was all that a tomb required. By the time of the Tutankhamun in 1300 B.C.E., wealthy Egyptians had at least 365 shabtis -one for each day of the year. To keep these unruly laborers in line, each group of ten shabtishad its own whip-toting supervisor!

Mysteries of Egypt (November 21 1999 – March 26 2000)
Mysteries of Egypt was a traveling exhibit organized by the Canadian Museum of Civilization in the 1990s.  It featured authentic and reproduction artifacts from ancient Egypt. 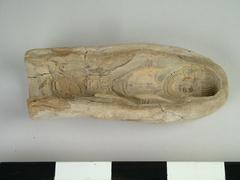 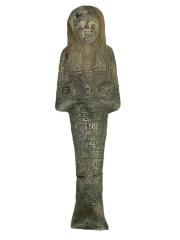