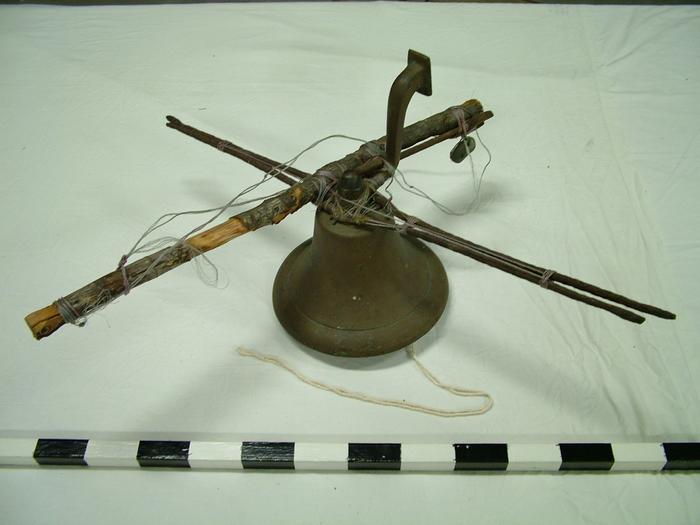 Two pieces of wood attached in the shape of an X with string and a rock attached at one end. The X shaped pieces of wood are on top of a rusted metal bell. From one side of the bell extends an L-shaped piece of metal. Inside the bell is the ringer which is still in working order. Separate from the bell but still part of the whole of the object is a bolt and rope attached to it. The particular function of this "bolt" is unknown.;This object is part of a collection of Vietnamese items that were gathered together by members of the Western Michigan Vietnamese History Committee. This committee was made up of former refugees, the city historian, and several local clergy members who were instrumental in helping refugees come to America. Their goal was to create a program which would help tell the story of the Vietnamese in their country. In 2002 they released a videotape called "From Saigon to Sanctuary" which uses interviews with local refugees and historical footage to retell their story. While they were working on this project, one idea was to have an exhibit of Vietnamese objects that helped tell the story of the refugees. Many of the members donated items, which they felt were representatives of their culture. When it was determined that the group would pursue a video, they felt it was best to donate the objects to the Museum. Many of the individual objects have already been identified for use in the Ethnic History exhibit.;The bell was originally was used on a Vietnamese fishing boat. The boat was used by Vietnamese refugees to escape to a resettlement camp in Malaysia in 1979. The refugees built a church at the settlement camp and hung the boat bell in the church steeple. The church was being dismantled while Rev. Howard Schipper and his wife Marybelle, the founders of the West Michigan Freedom Flight Refugee Center, were visiting. The refugees gave the bell to the Schippers. The Schippers hung the bell in the Freedom Flight Refugee Center and rung it every time they got a sponsor for a refugee to come to this country. Rev. Schipper gave it to the Public Library while working with the Western Michigan Vietnamese History Committee with the understanding that the object would be donated to the Museum. Gordon Olsen of the Public Library forwarded the item to the Museum.