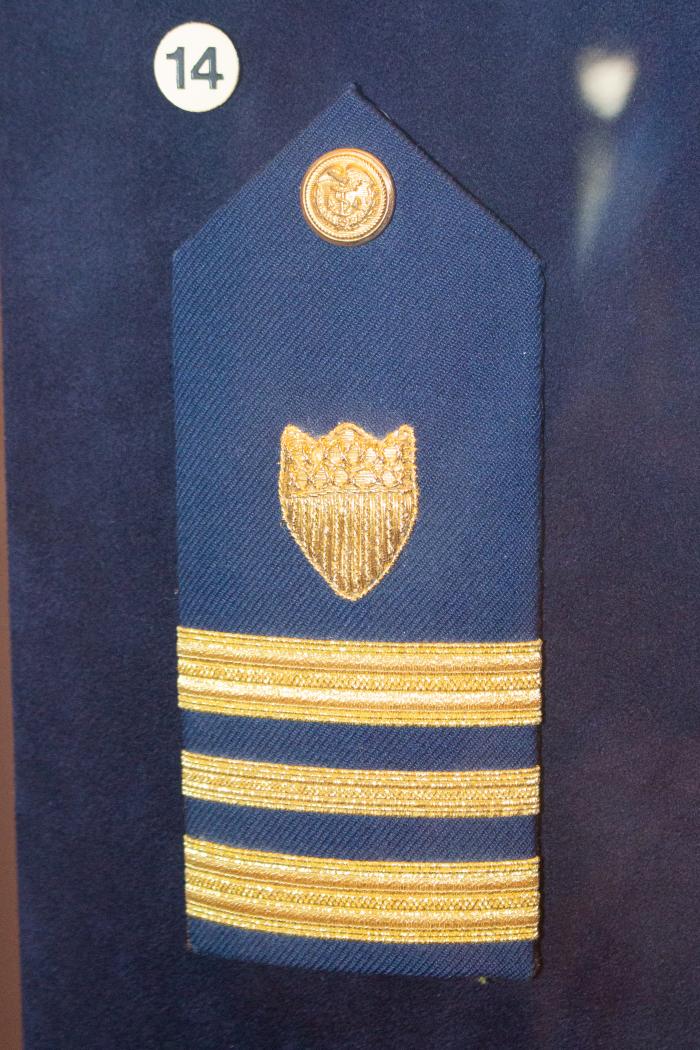 Rectangular shoulder board pointed at inside end, covered with blue fabrick. Pointed end secures to jacket shoulder by a snap with a Naval eagle motif. The end opposite the point has two gold colored wire lace stripes - one broad and one narrow - extending from edge to edge. The Lace stripes are surmounted by a gold-colored wire embroidered Coast Guard shield;Worn as a pair on the shoulders of the officer's tropical white shirt, dress blue jacket, or bridge coat to indicate the rank of lieutenant junior grade (j.g.)- the Naval services equivalent of an Army first lieutenant.;Owned and worn by Kent E. Fisher of Grand Rapids in 1975;Worn by Kent E. Fisher, of Grand Rapids as a Coast Guard Officer in 1975.;This style of shoulder board is a part of what is referred to as the 'new style' Coast Guard Uniform. In 1974 the U.S.C.G. adopted a uniform that was unique to that service. prior to 1974 Coast Guard officers and enlisted men wore uniforms nearly identical to their counterparts in the U.S. Navy.

V is for Veterans ()

Kent E. Fisher
Kent E. Fisher of Grand Rapids, Michigan began his career in the United States Coast Guard in 1970. He served as a group commander for the Coast Guard group in Muskegon from 1984 to 1987. He also acted as Public Relations Liason for the Reagan-Gorbachev summit in 1988.