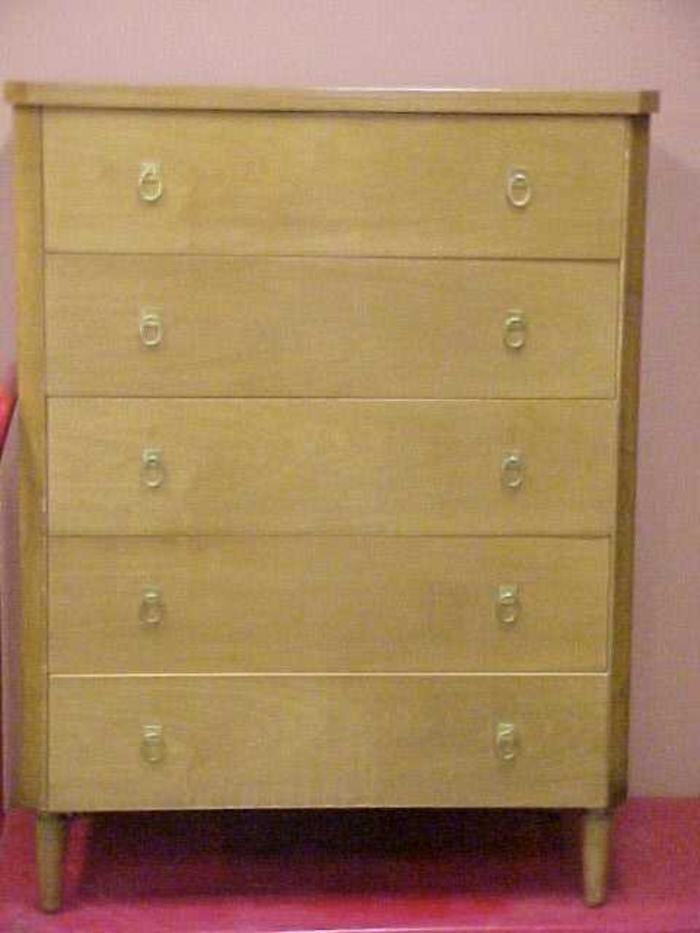 T. H. Robsjohn-Gibbings
T.H. Robsjohn-Gibbings was an English-born architect and furniture designer, who was prominent in the 1930s and 1940s. His designs fall into the Ancient Greek classification, although much of his work is indicative of Mid-century Modernism. From 1943 until 1956, Robsjohn-Gibbings worked in Grand Rapids, Michigan at the Widdicomb Furniture Company. He eventually moved to Athens, Greece, where he became the designer for Aristotle Onassis.

A hallmark of Mid-century Modern design, Robsjohn-Gibbings' work has decorated the homes of many celebrities throughout the 20th century.

In 1944, he wrote "Good-bye, Mr. Chippendale," a sardonic book that discussed his views on the early- to mid-20th century's fascination with Georgian and Victorian furniture styles, which he regarded as gaudy and unneccessary. In addition, he discusses the Bauhaus style and, in his view, its lack of humanity.

A controversial and revered designer from the 20th century, Robsjohn-Gibbings vocally despised the American and European inclination to decorate their homes with 17th and 18th century ornate reproductions, while fiercly advocating for the designs of ancient Greece.

Widdicomb Furniture Company
Widdicomb Furniture Co.
1873 - 1950
Grand Rapids, Michigan
SEE ALSO Widdicomb Brothers & Richards; Widdicomb Mantel Co.; George Widdicomb (Listed below)
COMPANY HISTORY
1873: Widdicomb Brothers & Richards incorporates as Widdicomb Furniture Co.
1887 and 1891: Local histories of Grand Rapids describe Widdicomb as the largest manufacturer of bedroom furniture in the world.
1915: Company is purchased by Joseph Griswold, Sr. and Godfrey Von Platen.
1950: Widdicomb merges with Mueller Furniture Corp. to form Widdicomb-Mueller Corp.
1960: Mueller severs ties to Widdicomb.
1970: Widdicomb Furniture Co. name is purchased by John Widdicomb Co.
PERSONNEL
At the time of the company’s incorporation, William Widdicomb was president, Theodore Richards was vice-president, and William’s brother Harry was secretary. William left the family business in 1883 for a position with the Grand Rapids National Bank. In 1885 he began a wholesale grocery business. But he returned to the company upon the request of its board, after the financial panic of 1893. He managed the company until his retirement in 1915. He was described as a clever mechanic who invented many improvements for machinery in the factory.
Lumber tycoon Godfrey Von Platen, furniture man Maynard Guest, and salesman Joseph Griswold, Sr. purchased the company from Widdicomb in 1915. Griswold served as president until he was succeeded by his son Joseph, Jr. who served as general manager and president from 1941 until 1964.
Free-lance designer William Balbach created designs for Widdicomb beginning in 1917.
English-born designer T.H. Robsjohn-Gibbings served as designer for Widdicomb from 1943 until 1956. Although he began to design lines of Modern furniture from the time he arrived, its production was postponed until 1946, when World War II ended. George Nakashima designed the “Origins Group” for Widdicomb in the late 1950s and early 1960s. Other designers from the early 1960s included Marge Carson, Dave Butterworth, Albert Herbert, and Ray See.
PRODUCTS
The first products of the Widdicomb Furniture Co. were spindle beds that were generally shipped to retailers unfinished or “in the white”. An 1878 article in The American Cabinet Maker, Upholsterer and Carpet Reporter states that Widdicomb made only “nine styles of work,” and specialized in low-priced ash, maple, cherry, and walnut bedsteads.
By the 1880s the line had expanded to include all forms of “medium and fine chamber furniture” including beds, dressers, chiffoniers, wardrobes, washstands, mirrors, and night tables. The company utilized a variety of woods including San Domingo and Tabasco mahogany, Circassian walnut, golden curly birch, bird’s-eye maple, and also a white enamel finish. Pieces from the late 1890s were also produced in quarter-sawn oak. The 1906 catalog shows bedroom suites and occasional pieces in all of these woods, in American Empire or Colonial Revival styles, or with vaguely French inspiration.
Between 1918 and 1920 Widdicomb advertised Queen Anne, Adam, and Chippendale-styled phonograph cabinets made by its photograph division. Bedroom suites from the 1910s and 1920s were produced from mahogany and walnut, or with a polychromed enamel finish, in a variety of period revival styles including Italian Renaissance, Venetian, Georgian, Louis XV and XVI, Chippendale, Hepplewhite, Early American, and “New England Colonial”. A number of Adam-influenced designs from the late 1910s featured caned panels overlaid with carved swags and wreaths. The distinctive Spanish suites made of shaded and decoratively painted walnut featured trestle tables, Roman arched panels, and baroque scrolled and carved silhouettes.
The company introduced its first Modern pieces in 1928, and by 1938 had stopped production of all traditional and revival pieces. A 1936 Grand Rapids Market Ambassador showed a streamlined Art Deco-style bedroom suite made of white harewood (a veneer, usually Sycamore that has been stained), offered jointly by Widdicomb and the Hastings Table Co.
T.H. Robsjohn-Gibbing’s Modern designs in the 1940s and ‘50s were in a warm blond wood tone, with either tapering, functional Scandinavian Modern shapes, or Modern designs with Neo-classical influences. George Nakashima’s “Origins Collection,” produced in the late 1950s and early 1960s included bedroom, dining room, upholstered, and occasional pieces of Modern design with Japanese and Shaker stylistic influences. Emphasis was placed on the grain and texture of the woods, which ranged from Circassian walnut table tops to hand-shaved hickory spindles.
OTHER SOURCES
The Grand Rapids Public Library owns a large collection of catalogs and original archival materials, which spans nearly the entire history of the Widdicomb Furniture Co. and its predecessors.
MARKS AND LABELS
The company’s earliest beds sometimes had paper shipping labels on the inside bottom of the headboard, and/or a burn mark on the back of the headboard with “WIDDICOMB/FURNITURE CO./GRAND RAPIDS/MICHIGAN”. The company used a distinctive, cursive type style for the name “The Widdicomb Furniture Co.” as its registered trademark between 1903 and 1937.

George Widdicomb & Sons
1857 – 1863
Grand Rapids, Michigan
Cabinetmaker George Widdicomb left Devonshire, England for New Hampshire in 1843. In 1857 George and sons William, Harry, John, and George, Jr. opened their cabinetmaking business in Grand Rapids. William made a selling trip to Milwaukee in 1858, and claimed to be the first traveling furniture salesman from Grand Rapids. The business was closed during the Civil War, when all four brothers joined the Union Army. George, Jr. died during the war, leaving the remaining three brothers who joined in starting the Widdicomb Brothers & Richards Co. in 1869.

The source, with permission of the author, is Grand Rapids Furniture: The Story of America’s Furniture City by Christian G. Carron, published by the Grand Rapids Public Museum. 1998.