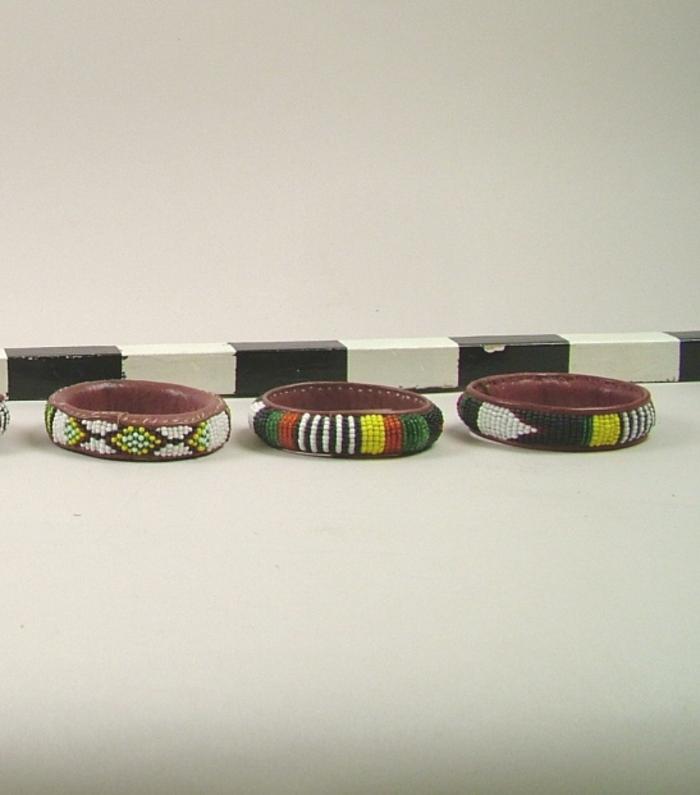 Three bracelets made of red leather with ornate multicolor beading.;Generally, one can wear up to four but they were never worn by themselves but more often in a pair. These bracelets were worn more by Touareg women than by Wodaabe women. This material is part of a large collection intended to document the traditional nomadic lifestyles and material culture of 4 tribes: Lapp or Sami, Tuareg, Wodaabe, and Kazak, 'at the turn of the Millenium'. They will enhance the Museum's extensive ethnographic holdings of cultural materials from this part of the world. They will also be used to mount the Public Museum's own temporary version of the original 'Nomads' exhibition. The accompanying video material creates a context for the artifacts, explaining the hardships the nomads face as their traditional ways of life collide with the sedentary people surrounding them.;This material was collected from unknown tribal members in their countries around 1991 and 1992 by Francois Tremblay of the Musee de la Civilisation, Quebec. It was imported to Canada, cataloged, and put on exhibition in 'Nomads'. Some of the material was put into storage until the Musee de la Civilisation no longer wished to pay this expense. It was then offered to any museum that would pay for the shipping. I heard of the opportunity from Michael Stafford, former PMGR intern and current Curator of Anthropology at Cranbrook Institute of Science, and pursued the matter with Francois Tremblay. The original collection and exhibition included a fifth group, the Montagnais (Innu) people of northern Quebec, but this material was transferred instead to a Montagnais museum in Quebec.;Originally all of the world's cultures started out with nomadic lifestyles, first as hunter/gatherers and later joined by seasonal gardeners and herdsmen. At the turn of the Millenium (1999-2001) there are few remaining nomadic groups, as most others have adopted or developed a sedentary lifestyle dependent on agriculture and/or trade.Four such remaining nomadic cultures were documented in 1991-92 for the 'Nomads' exhibition. At that time, the remaining nomadic people were increasingly encroached upon and restricted by sedentary settlers, roads, international political boundaries, and other developments.