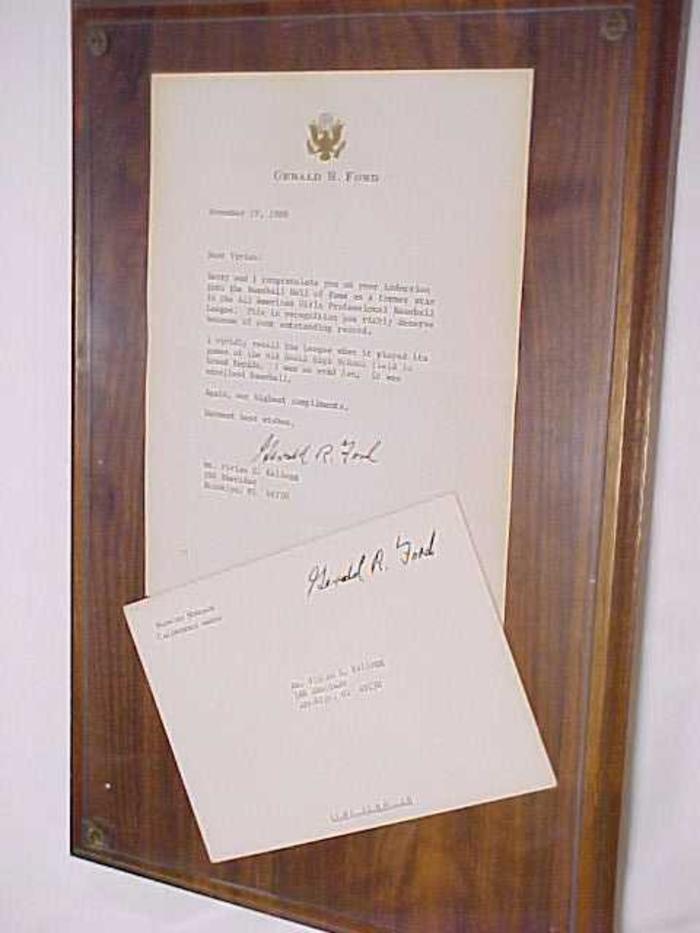 Envelope and letter from former President Gerald R. Ford, to Vivian C. Kellogg, congratulating her on her induction to the Baseball Hall of Fame because of her participation in the All American Girls Professional Baseball League. They aremounted behind glass on a wooden plaque.;This letter helps to document the Grand Rapids Chicks of the All American Girls Professional Basebal League (AAGPBL), pioneers in the development of women's professional sports. It may be used in the temporary 'Leagues of Their Own' exhibition.;Envelope and letter are signed 'Gerald R. Ford'. |

President Gerald R. Ford
Gerald R. Ford was born Leslie Lynch King, Jr., in Omaha Nebraska to Dorothy Ayer Gardner and Leslie Lynch King, Sr. In 1913, his mother moved with him to her parents’ home in Grand Rapids, Michigan, and in that same year she gained full custody of her son. In 1916, Dorothy remarried Gerald Rudolff Ford, and in 1935, though not formally adopted, Leslie Jr. legally changed his name to Gerald Rudolff Ford, Jr.
Ford was a member of The Boy Scouts of America, and is the only U.S. President to become an Eagle Scout. He grew up in the Heritage Hill neighborhood of Grand Rapids and attended Grand Rapids South High School. As a star athlete, he was captain of his football team and was selected for the All-City Team. He was later recruited by the University of Michigan’s football team and played for the school in the 1930-1934 seasons. After graduating in the spring of 1935 with a degree in economics, he received offers from the Detroit Lions and the Green Bay Packers. Instead, he took a coaching position at Yale and attended law school there. He graduated in 1941 and was admitted to the Michigan bar association that year.

After his schooling, Ford became an ensign in the U.S. Naval Reserve. He served from 1942-1946. He moved quickly through the ranks and resigned in 1946 as a Lieutenant Commander. He received the Asiatic-Pacific Campaign Medal with nine engagement stars for his service, as well as the American Campaign and World War II Victory Medals. He returned to Grand Rapids after his service. In 1948, Ford married Elizabeth “Betty” Bloomer Warren at Grace Episcopal Church in Grand Rapids. They had four children: Michael, John, Steven, and Susan.

Ford was heavily involved in local Republican politics following his military service. He was elected to the U.S. House of Representatives in 1949 and served there for 25 years, becoming House Minority Leader in 1965. In 1973, after Vice President Agnew resigned, President Nixon appointed Ford as his new Vice President. Less than a year later, in 1974, Nixon also resigned, making Ford President of the United States.

One of Ford’s first acts as president was the controversial pardoning of Nixon, issued in Proclamation 4311. Shortly after, he attempted to pardon Vietnam War “draft dodgers” through an amnesty program that required reaffirmation of allegiance and two years of public service work. Ford’s presidency was plagued with problems, including the end of the Vietnam War and the federal deficit that continued throughout his term. It is because of these problems and Ford’s pardons that he faced two assassination attempts in 1975. It is also likely the result of these issues that caused Ford to lose the 1976 presidential election to Jimmy Carter.

After his presidency, Ford published his autobiography, A Time to Heal, and an anecdotal book, Humor and the Presidency. He maintained a friendship with his successor, Carter, and visited Washington often. He remained active in Republican politics, though being a vocal opponent to conservative colleagues’ anti-LGBT opinions and the war in Iraq.

At the 2000 Republican National Convention, Ford suffered two minor strokes. This triggered a slow decline in the president’s health and on December 26, 2006, Ford died in his home in Rancho Mirage, California, of coronary artery disease. He was 93 years old. His funeral and memorial services were held at the National Cathedral in Washington, D.C., and he was buried at the Gerald R. Ford Presidential Museum in Grand Rapids, Michigan. 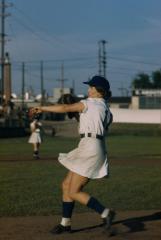