This cap is a reproduction of a baseball cap from the Battle Creek Belles which was a female baseball team that operated from 1951 to 1952. The team was based in Battle Creek, Michigan and played in the All-American Girls Professional Baseball League.

This cap accompanies uniform number 2002.61.15 and is made of black wool. There is a yellow patch on the center front with a black BC on it. 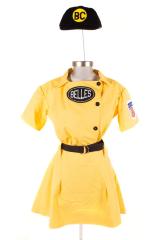 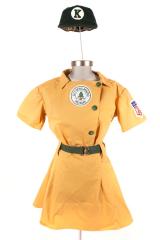