A ruby is a pink to blood-red colored gemstone which is also a variety of the mineral corundum. The red color is a result of the presense of chromium. The ruby is the birthstone of July and is highly valuable and sought after. This specimen shows the pinkish rubies within the rock matrix. It was donated to the GRPM by Berdeana Jones, in loving memory of Les Jones.

Given In Memory Of Les Jones

L Is For Lyceum - Fluorescent Minerals (December 22 2016 – December 31 2017)
In the ancient world, the lyceum was where the greatest Greek philosophers taught. The concept of the lyceum was revived by American intellectuals in the 19th century who believed that public education was an important part of our democracy. Founded in 1854, the Grand Rapids Public Museum was originally named the Grand Rapids Lyceum of Natural History. In 2015 the Grand Rapids Public Museum School was founded with many community partners. The Museum School has developed its own version of the lyceum - an innovative after-school program that pairs local experts with middle school learners to exercise their minds and bodies by exploring an eclectic range of topics. 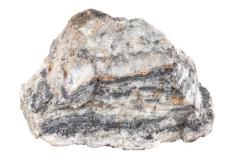