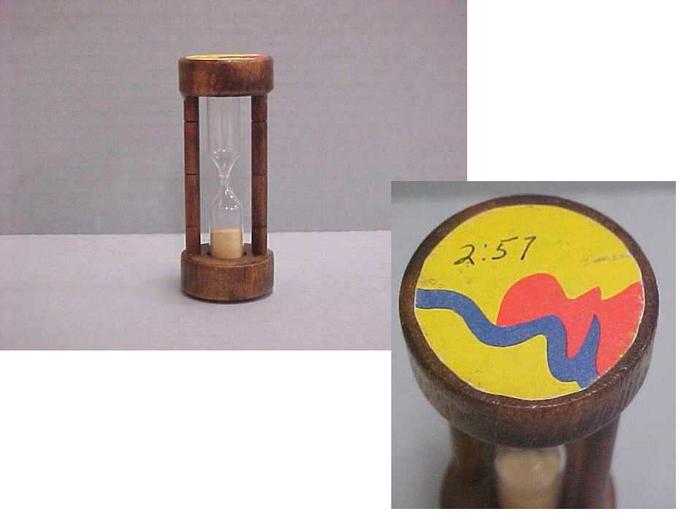 Glass egg timer or hourglass containing white sand, in brown wood frame, with stickers on top and bottom showing the official city of Grand Rapids logo. In pen on top, 3.12;This timer and its twin were used at Grand Rapids city commission meetings to keep meetings moving quickly. The exact amount of time for the sand is 3 minutes and 12 seconds. It was timed exactly by the city clerk when a citizen complained that they had not received a full three minutes to speak. It sheds a some what humorous light on the workings of city government. These timers will be used in the permanent exhibition Collecting A-Z: W is for Watches and Clocks.;Used by Mayor John Logie to regulate length of time people spoke at city commission meetings between 1992 and 2003.;In pen on top, 3.12;This egg timer and its companion were used from 1992 to 2003 by Grand Rapids Mayor John Logie to regulate the amount of time people could speak at Grand Rapids city commission meetings. It bears the official logo of the city of Grand Rapids. It was timed to the exact second when a citizen complained that they did not receive a full three minutes to speak.