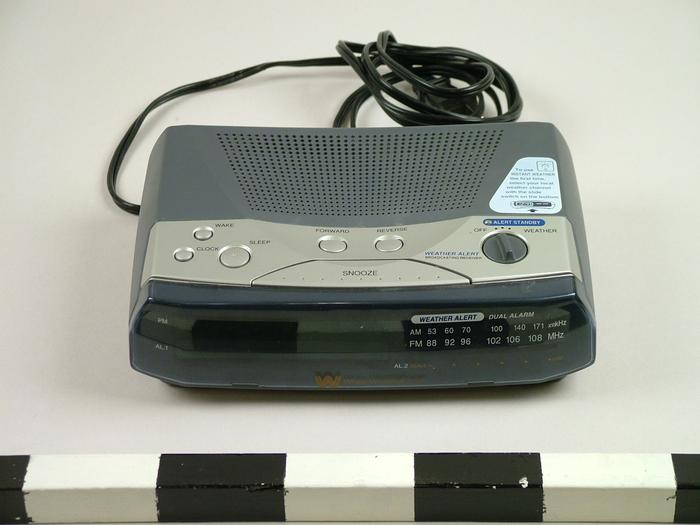 Clock Radio, Sudanese Immigration Archival Collection #137. Dark grey digital alarm clock with transparent, smoke-colored plastic face. A lighter silver panel and several buttons cover part of the top, while an extend-able antennae is attached to the back side. A black electric cord also exits the case from the back side.

The history of the clock radio is shrouded in mystery. Nobody really knows who invented the first clock radio. Even the U.S. Patent Office has no record of it. However, many people give credit to two men in the 1940s, James F. Reynolds and Paul L. Schroth Sr. According to Reynold’s grandson, after the alarm on his windup clock broke, he rigged up the key of his windup clock to the volume knob on his radio. When the broken alarm on his windup clock went off, the key would turn, which would turn up the volume on his radio. Whatever its invention date, the clock radio was a big hit in the 1960s and 70s. One of the most coveted clock radios was the Sony Dream Machine which debuted in 1968. The demand for that radio was incredible; according to Sony it was present in a third of American homes. However the clock radio’s appeal was lost in the 1980s and 1990s, and it became just another commonplace item. Nevertheless, there has been a revival since the 2000s thanks to the invention of digital music players. A gift that had become unappealing now could be paired with an iPod or MP3 player, causing the renewal of the clock radio’s demand.

This clock was the first alarm clock owned by David Bishow, a Sudanese refugee who came to Grand Rapids, Michigan.