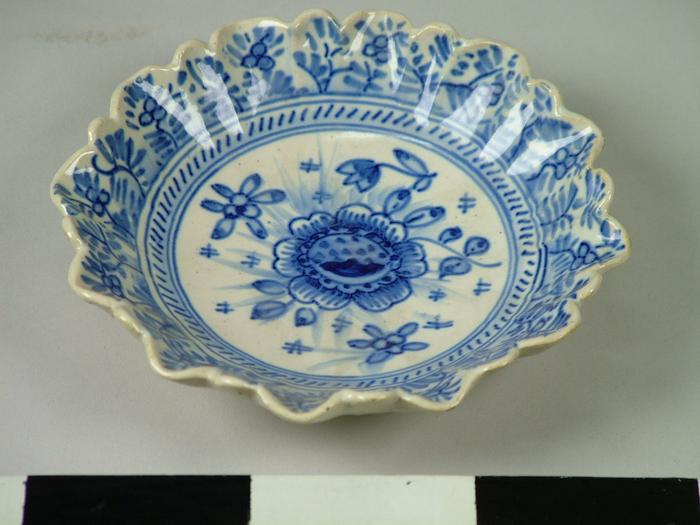 This plate is glazed earthenware and was made by potter Gerrit Wykstra of Grand Rapids, Michigan, 1940-48. The small blue-and-white delftware dish with a large central flower and scalloped rim. A wide band of painted leaves and berries surrounds the interior edge. "Wykstra" is written in blue on the plate's underside.

Gerrit Eit Wykstra
In 1906 Gerrit Eit Wykstra (1880-1949) and Theake Folkert van der Meulen (1859-1943) established a partnership for the production of art pottery. Wykstra, a native of the Netherlands, had worked at the Gouda Pottery Works and at a Delft pottery factory. Located at 433 Brigham Road, Dunkirk, New York, the firm produced what they called Dunkirk Delft, a style of decorated pottery highly reminiscent of authentic Delft ware. The partnership ended in 1909, and for a time Wykstra continued to make pottery in Dunkirk, moving to Grand Rapids, Michigan, in 1920.

In February 1922, Gerrit was a director of the newly formed Michigan Porcelain Tile Company (MPTC) of Ionia, which intended to manufacture “glazed tile, both white and colored,” and a new building was being constructed to house the operation. On October 28, 1922, he married Ida Andringa (1887–1957), a Grand Rapids native. Presumably Gerrit continued his painting, supplementing his income by making decorative “tile in his spare time” from about 1929 until 1944, when he went back to pottery. In the 1930 Census he is listed as a tile manufacturer, perhaps as a result of employment at MPTC or as a result of making tile at his home pottery. From 1936 through 1941 he is listed once again as a painting contractor in the decorating business, perhaps still producing Dutch tiles as a sideline. Gerrit Wykstra's obituary, was published alongside his photo in the Grand Rapids Press, April 29, 1949