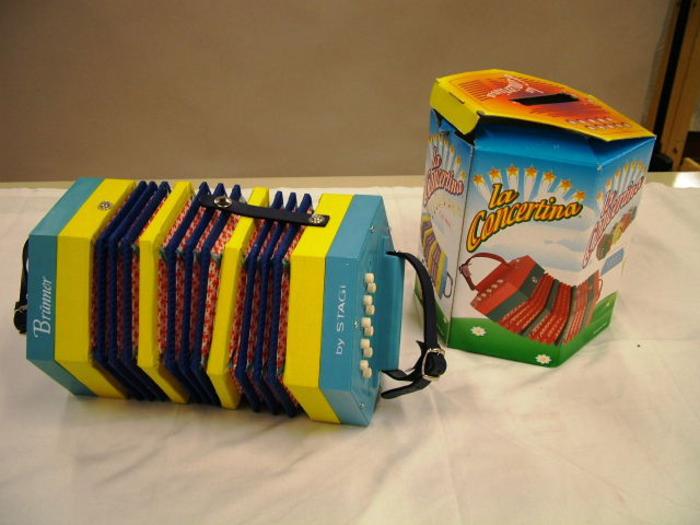 This concertina is made of light blue plastic and yellow vinyl covered plastic. It has vinyl hand straps on either end and a series of buttons on each side. When opened, it reveals an accordion-pleated bellows of red and white edged with blue vinyl. It is accompanied by its box.

The Chemnitzer Concertina is a free-reed instrument related to the accordion that was invented in Chemnitz, Germany by Carl Friedrich Uhlig in 1835. It is made of hand-held bellows which can be opened or closed to force air through specific holes with the pushing of buttons.

Concertinas and other types of accordions have been used in folk music since the early 19th century. They are especially popular in Central and Eastern Europe, where they often accompany polka dancing, but also have wide use in Italy, England, and even Argentina.

Purchased With Funds From The Michigan Humanities Council

Discovery Kits include a variety of artifacts and specimens from the Museum’s Collection that allow students to investigate global and local objects. The Collections support the Museum’s mission of inspiring curiosity and discovery around science, history, and culture. Each kit includes objects from the Museums archives, helpful resources and suggested activities. Discovery Kits are a great way for teachers to incorporate primary source and object-based learning into the classroom or as a way to prepare for or extend a Museum visit.

Virtual Discovery Kit: Music (April 2020)
Music is one of the first elements of culture that comes to mind. Music is found in all civilizations and has been for thousands of years. Use this collection to investigate a variety of musical instruments from around the world. 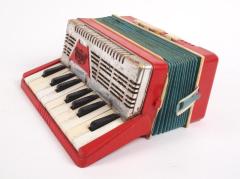