This die-cast model is a replica of a 1916 Studebaker Truck used by VanWestenbrugge & Erb to haul groceries. It is painted black and is loaded with small crates of cheese and eggs. This model was produced for Gordon Food Service, a Grand Rapids Wholesale food distributor, to commemorate the company's history. VanWestenbrugge & Erb was the predecessor to Gordon Food Service and this truck represents a major local company and an industry that is important to the economy.

The Studebaker Corporation was formed in 1852 as a blacksmith shop by brothers Henry and Clement Studebaker in South Bend, Indiana. The company manufactured horse-drawn wagons for farmers, miners, westward settlers, and even the Civil War’s Union Army. Around the turn of the century, they began making automobiles, unleashing their first gas-powered vehicle in 1904, a two-cylinder, 16-horsepower touring car. By 1913, Studebaker was the third-largest producer of automobiles in America with all the required assembly happening in Detroit. 114 years later, Studebaker closed its production line on March 17, 1966, leaving a legacy of drivers clubs 15,000 fans strong, a national museum, and direction for the future cars of America.

In Honor Of The Employees Of Gordon Food Service

Virtual Discovery Kit: A is for Autos (April 2020)
Automobiles take us places, from school, to work, to leisure. Learn about the history of cars, Michigan’s impact in the automobile industry, traveling and what draws people to own and drive cars.

Discovery Cart: A is for Autos (February 4 2020)
Discovery Carts connect visitors to Museum exhibits through hands-on exploration of objects in the Collection. Knowledgeable Discovery Cart facilitators engage guests with interactive activities and discussion questions during GRPM's open hours.
[Discovery carts are offered on a rotating schedule depending on facilitator availability] 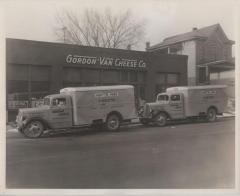