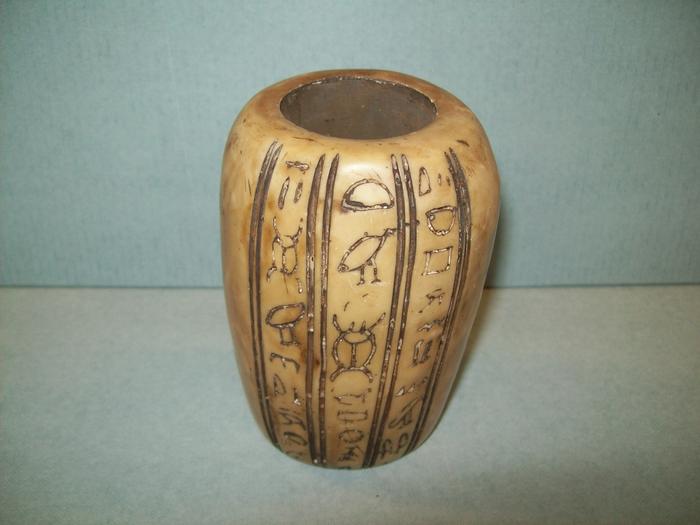 This replica of a canopic jar is made of tan stone with a marbled appearance. There is a hole in the top of the jar, although it is only about an inch deep. One side of the jar is decorated with Egyptian hieroglyphics. There is a separate paper tag stored inside the jar describing the significance of the replication.Canopic jars were originally crafted of stone or ceramic and were used to store the internal organs of a mummy. It shows how the embalming practices changed over time. Later organs were specially preserved inside the mummy's body,

Gift Of Taylor, Steele A.

Taylor, Steele A.
Steele Taylor is a New Jersey native and a World War II Navy veteran. In 1948, after earning a degree in economics from Williams College in Winston, Massachusetts, he accepted a job offer from Dohler-Jarvis in Grand Rapids. In 1960 he moved to Grand Rapids Steel and was part owner and president when he retired in 1985. He has served on many boards throughout his career, such as the Mary Free Bed Hospital, Aquinas Emeritus Center, various Hospice boards and former member and president of the Art and Museum Board. Steele and his wife Mary are consummate world travelers and their collection is a testament to their travels. Artifacts donated by Steele are exceptional resources, representing various regions of the world. He has also donated an extensive collection of pewter items to the Grand Rapids Public Museum. His pewter collection can be seen on display in the Museum's "P is for Pewter" as part of the A-Z exhibit