This item is a large carved, painted, wooden Bugs Bunny character. He was originally displayed on one side of the large marquee inside Studio 28 that listed movie showtimes.

According to museum records, this figure is handmade It is a copy of a piece that was originally used outside at their drive-in. The original rotted and they had a new one carved. The new one along with the Goofy figure was used inside behind the front ticket counter on both sides of the board that listed the movies and their times. Each figure has an adjustable arm that would be positioned to hold back a red curtain so that it looked like they were open theater curtains to show the movie screen. They also have sockets for light bulbs on several spots. The figures are made of wood and are flat-backed.

Studio 28 was a movie theater located in Wyoming, Michigan, the first megaplex and once largest theater in the world, opening on Christmas Day, 1965, and closing November 23, 2008. The theatre started with a single, 1,000 seat theatre in 1965, expanding to two theatres in 1967, six theatres in 1976, twelve in 1984 and twenty in 1988. The theatre broke a single day attendance record on November 29. 1990 serving 16,000 guests, a record which still remains unbroken. Studio 28 was opened by movie pioneer Jack Loeks and eventually became the flagship theatre of Jack Loeks Theatres, Inc.., and later Celebration Cinema! (Loeks Theatres, Inc.), the company started by Jack's son, John Loeks. After the opening of several other theatres in the region, including sister theatres, Celebration Cinema! North and Celebration Cinema! South plus purchasing the Cinemark at nearby Rivertown Crossings Mall, Studio 28 saw a sharp decline in attendance, leading to its eventual closure in November 2008. 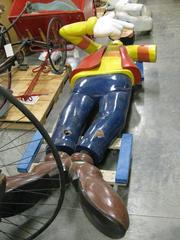