This rust-colored party dress is made of silk and has a gold-colored lace overlay. It has an attached tulle underskirt and the upper bodice and sleeves are unlined. This dress has a scoop neckline and features a metal Talon zipper down the back of the dress. There are three bows down the back of the dress next to the zipper. Features that are indicative of the 1950s are the New Look silhouette, the cinched waist, and the scoop neckline. This dress was purchased at Joseph P. Doody Inc. in Grand Rapids, Michigan and was worn by Doris Cole to dances at Radcliffe College between 1955-1959. It was photographed with petticoat number 155226. 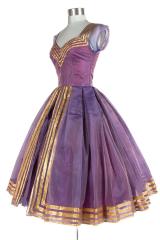 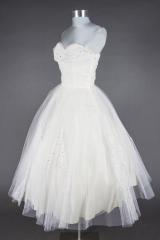 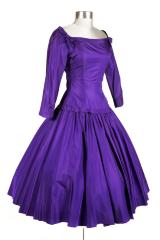