I love this story and we can learn so much to learn from artists and creatives. So proud of you Uncle Frank. I sometimes think I was born in the wrong time, as I would love to be able to wear dresses like these daily. It was certainly a special time. Thank you for sharing this interview and the beautiful photographs. NICOLE MAIRE MOORE PERULLO, 8/18/2020

This purple party dress is made of silk and has an organza overlay. It has a closely-fitted bodice with a sweetheart neckline and sheer cap sleeves. There is gold trim along the neckline as well as at the hem of the skirt. The same gold trim can be seen down the split at the front of the skirt. Rhinestones decorate the bodice and skirt and there is a metal Crown zipper on the proper left side of the waist. This dress was designed by Frank Perullo of David Hart Incorporated. It was purchased in Grand Rapids, Michigan, and was worn by Doris Cole to private dances hosted by East Grand Rapids High School classmates at hotels and country clubs. Features that are indicative of the 1950s are the New Look silhouette, the cinched waist, and the side seam zipper. This dress was photographed with petticoat number 130171.

This style of dress was known as the New Look which was created by Christian Dior in 1947. The New Look featured cinched waists, full skirts, and emphasized the bust and hips. Dior often lined his skirts with taffeta or percale to help it retain its full shape. This style of dress remained popular throughout the 1950s and was a turning point in women’s fashion. During World War II fabrics were rationed and women’s style allowed for very few embellishments. Restrictions were put on the number of seams allowed in a garment, the number of buttons that could be used, and how many pleats were allowed. Women had to provide coupons when buying fabric and ready-to-wear clothing had to meet government standards. When the New Look was introduced after the war, women were lining up to purchase the style which promoted femininity and curves.

Frank Perullo
Frank Perullo was born on May 10th, 1925, and attending the Fashion Academy in New York City, New York after high school. At that time, he worked in various shipping departments for sportswear companies in the Garment District and also free-lanced sketches for established designers. While working at 525 Seventh Avenue, he was introduced to a top designer at Young American Deb who offered him a designer job. In the early 1950s, Perullo was hired as a designer by David Hart of David Hart Inc. Due to the popularity of his designs, he was given "Dresses by Perullo" windows by Lord & Taylor on Fifth Avenue and his name began to appear on David Hart labels that read "Perullo, David Hart Inc.". 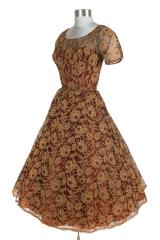 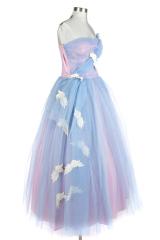 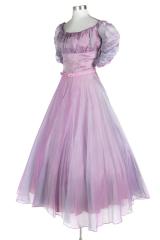