This evening dress is made of silk and has a white net overlay. The bodice and part of the skirt are decorated with purple lace. It is strapless and has a sweetheart neckline. The skirt has multiple layers to help add volume and the bodice is boned. There is a Talon zipper on the proper left side of the waist. This dress also has an interior label that reads "Will Steinman, Original". Features that are indicative of the 1950s are the New Look silhouette, the cinched waist, and the side seam zipper. This dress was worn by Janie or Doris Cole of Grand Rapids, Michigan.

Will Steinman
Will Steinman was a formal dress company that operated from the 1920s through the 1960s. They specialized in prom, formal, and wedding dresses. 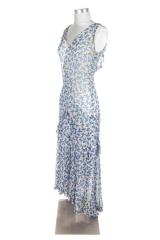 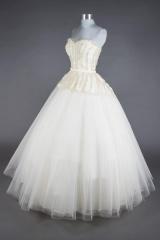 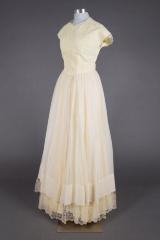