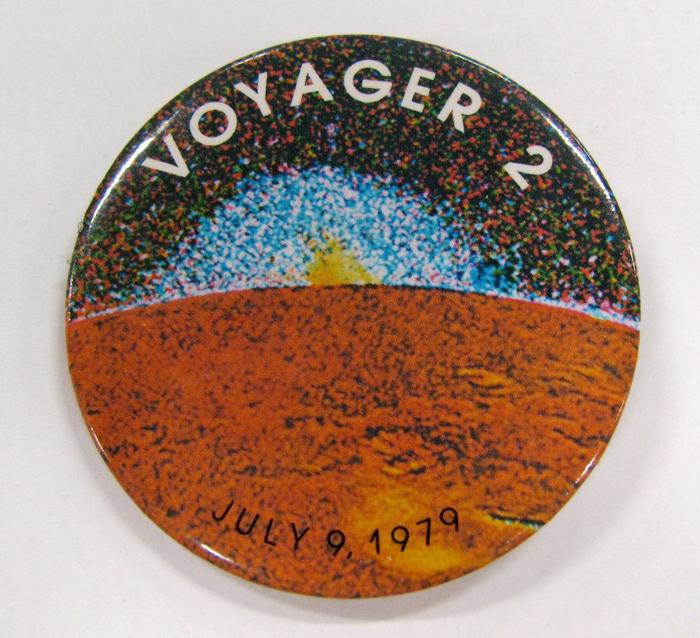 A promotional button (badge or pin) that is abstract or impressionistic in style. The bottom half of the pin is reddish-orange, meant to be the surface of Mars. In the center of the button is a yellow dot surrounded by a blue semi-circle. The top of the button is black and the words "Voyager 2" are printed. The date July 9. 1979 is printed at the bottom of the pin.;This collection of space-related buttons provides the Museum with concrete examples of souvenirs used to commemorate many of the space program's milestones of the 1970s, 1980s, and 1990s. The collection was put together by the donor's husband who worked at NASA's Jet Propulsion Laboratory (JPL) during those years. These types of buttons would have been given out to members of JPL project teams, but some were also available to general public, demonstrating the wide appeal of the space program. There are observable differences in the buttons that were clearly designed for more of a mass market, versus those designed to be souvenirs for JPL project team members.;The twin space shuttles Voyager 1 and Voyager 2 were launched in 1977. The primary mission was the exploration of Jupiter and Saturn. After making a string of discoveries there -- such as active volcanoes on Jupiter's moon Io and intricacies of Saturn's rings -- the mission was extended. Voyager 2 went on to explore Uranus and Neptune, and is still the only spacecraft to have visited those outer planets.

Gift Of Pasadena, California Edward A. Batka Who Worked For 36 Years At Jet Propulsion Laboratory