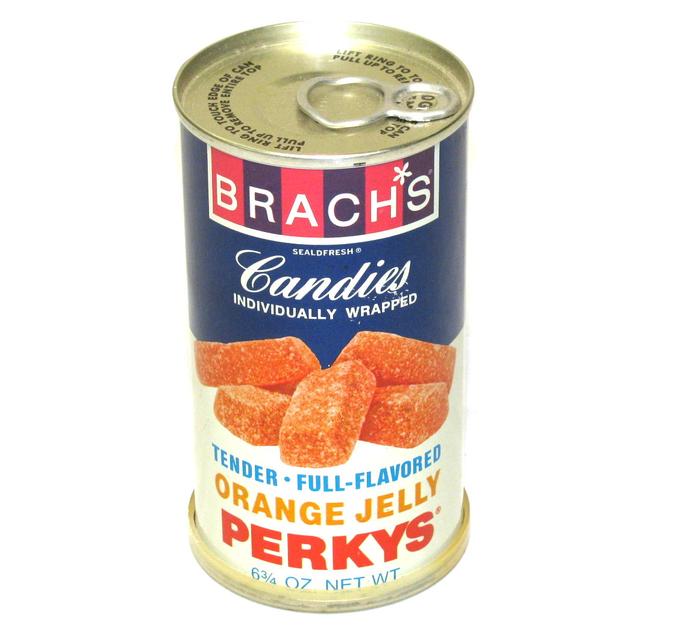 One can of Brach's Orange Jelly Perkys. The can has a pull tab and a plastic lid for use after opening and was designed to appeal to the travelling public. The candies are individually wrapped. Perky was the name of a Brach family dog.;This group of candy containers is an excellent addition to the Museum's collections. The donor was intimately familiar with the candy business, and built his collection to reflect important changes in merchandising and packaging over time. This collection spans much of the twentieth century, and contains examples of Brach's candy (by whom the donor was employed) and many other manufacturers from the Midwest. Taken together the collection shows how the candy business evolved from early forms of unwrapped bulk candy sold in cardboard cheese tubs, to metal pails, to the wide variety of boxes, tins, and containers available today.;"Brach*s Sealdfresh Candies, Individually Wrapped", "Tender - Full-Flavored Orange Jelly Perkys", "6 3/4 OZ. Net Wt." The pull tab says " Lift ring to touch edge of can pull up to remove entire top".;This candy container is part of a large collection assembled by the donor over the course of his career as a distributor for the Brach Candy Company, and later in life as a retiree. The donor acquired the containers from a variety of places, including his regular customers, at flea markers, antique shops, and from fellow collectors. The group of containers donated to the museum in 2011 is a small subset of the collection, which consists of several hundred containers.;Brach's Confections, Inc., founded as E. J. Brach and Sons, is one of America's leading manufacturers of confections and fruit snacks, with principal offices in Dallas, Texas and Chattanooga, Tennessee. In 1904 Emil, his wife and two sons, Edwin and Frank, opened a small store at the corner of North Avenue and Towne Street in Chicago, IL, called the "Brach's Palace of Sweets." The "factory" was in the rear, and the selling area was in the front of the store. They built the business making and selling great-tasting, high-quality candies at a fair price. Today, over 100 years after Emil J. Brach opened his "Palace of Sweets" in Chicago, BRACH'S Confections continues to be one of America's leading candy companies. Brach's is the leading manufacturer of fresh loose candy in the U.S. Brach's is one of the leading manufacturers of staple (everyday) candy and seasonal (Halloween, Christmas, Valentine's, and Easter) candy.