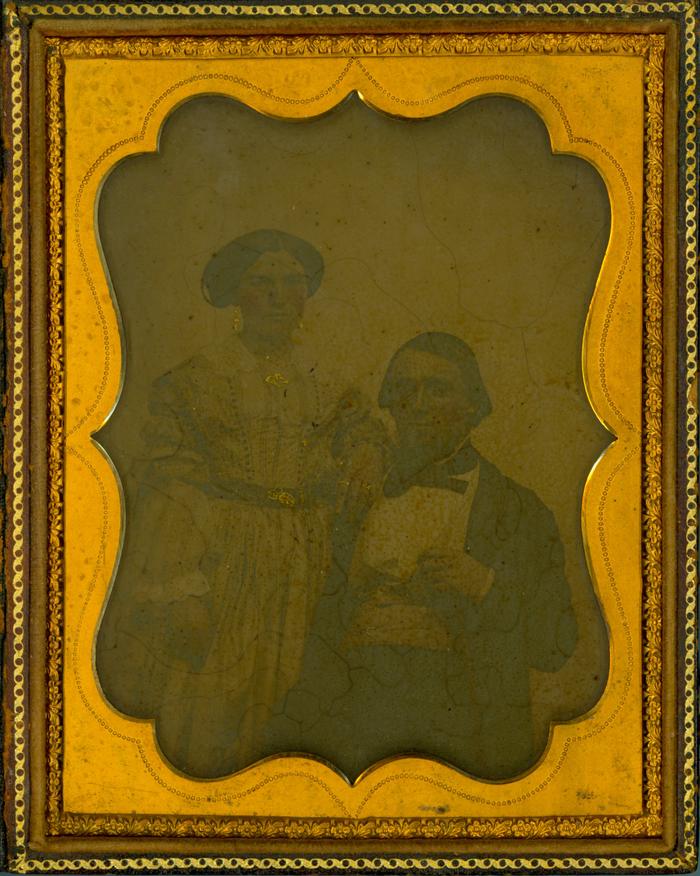 Tintype photograph of Aaron B. Turner and Charlotte A. Richards in a brown case. The photograph has brass trim around it with brown velvet on the left side of the case. Gold details can be seen on Charlotte A. Richards.;The Grand Rapids City Seal was designed and engraved by Aaron Turner, the City Clerk in 1850. The motto, "Motu Viget," means "strength in activity." Officially adopted by the City Council on June 25, 1850, the seal depicts a hand reaching down from the clouds holding the scales of justice. Centered on the seal is the American Eagle protected by a shield. At the eagle's feet are the points of arrows. http://grcity.us/city-manager/Pages/Government-Information.aspx;The first commercially available photographs were known as daguerreotypes. They usually date between the years 1840 to 1855. These photos were printed on a silver plate and are very reflective. Daguerreotypes were expensive to produce due to the nature of the process and materials involved. Ambrotypes are a second type of cased photograph, which typically date between 1855 and 1865. They were printed on glass, which gives the photo a three-dimensional look. The ambrotype was much less expensive to produce than the daguerreotype and it lacked the daguerreotype's shiny metallic surface. Tintypes were used from 1855 through the turn of the century. Compared to the other two types it was cheaper and quicker to make a tintype, which made them much more widespread. Contrary to their name, tintypes were actually printed on a thin sheet of iron, not tin.

Gift Of Hariette A. Richards

Turner, Aaron B.
Aaron B. Turner (August 22, 1822 - June 9, 1903) was born in Plattsburg, New York. His family was some of the first pioneers to arrive in Grand Rapids in 1836. At a young age, Turner went to work at Grand Rapids first newspaper, the Grand Rapids Times and went on to a distinguished career as the editor of the Grand Rapids Eagle newspaper. In 1843 he married a Miss Sibley, and had several children. In 1850 he became the first City Clerk for the newly incorporated City of Grand Rapids. He also designed and engraved the City Seal for Grand Rapids. Turner was involved in politics, and identified with anti-slavery elements of the new Republican Party as early as 1854.  Later in life he was known as a sportsman interested in hunting and fishing, as well as an amateur artist of some talent. Turner died at the age of 80 after sustaining serious injuries falling from a streetcar in Cincinnati.