Simon, which had been purchased by the donor's husband in the 1978 for their children, was accepted by the Grand Rapids Public museum due to its representation of iconic consumer electronics in 2012.

Simon is an excellent example of consumer electronics due to the fame of its designer (Ralph Baer) who was the man responsible for the design of the world's first video game system -- The Brown Box of 1968; additionally, the fact that Simon is still in production today is astonishing.

"Simon was released by Milton Bradley in 1978 with much fanfare, including a midnight release party at Studio 54, the elite disco in New York City. An instance success, the game reached its peak during the 1980s and continued to sell for decades thereafter." (Source: National Museum of American History)

TOYS! (2018 – 2019)
The Grand Rapids Public Museum will present an interactive, multi-generational exhibition of toys and games sure to rekindle childhood memories and spark the creation of new ones.  This GRPM original exhibit will feature toys and games from the museum’s collections in meticulously crafted displays representing childhood in different eras. 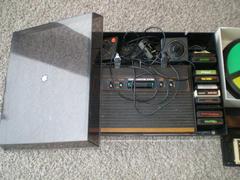