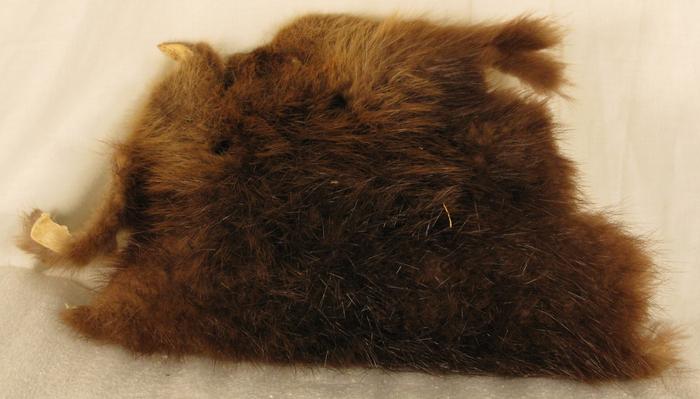 Furs such as this were used by many different nations for warmth during the winter months. After an animal was skinned, the fur was hung to dry and prepared to be made into clothing or used in creating tools.

Beginning in the 1500s, the French and Native Americans in the Great Lakes region began trading furs. Beaver pelts became extremely valuable and fashionable in Europe, nearly causing the extinction of beavers. Other furs were also used by Native Americans such as muskrat, fox, bear, and wolf pelts.

Discovery Kit: Anishinabe Culture (October 25 2019)
Discovery Kits include a variety of artifacts and specimens from the Museum’s Collection that allow students to investigate global and local objects. The Collections support the Museum’s mission of inspiring curiosity and discovery around science, history, and culture. Each kit includes objects from the Museums archives, helpful resources and suggested activities. Discovery Kits are a great way for teachers to incorporate primary source and object-based learning into the classroom or as a way to prepare for or extend a Museum visit.

Virtual Discovery Kit: Anishinabe Culture (April 2020)
Learn how the Anishinabek have lived alongside the natural world through a variety of artifacts that tell the story of the first people of this place.