Upright phonograph cabinet with six internal shelves. In the late 1910s and early 1920s, there was a shift from wax cylinders to discs. This allowed new furniture companies, such as the Grand Rapids School Equipment Company, to manufacture phonographs that play a disc. This is a L'Artiste Model 2 Adam upright phonograph. While many manufacturers only made the cabinet for the phonograph, the Grand Rapids Phonograph Company made the actual phonograph as well. This machine was owned and used by John F. Goense and his family beginning in the 1920s.

Donated in loving memory of John and Rita (DeYoung) Goense by their children – John, Diane, Mark and Carol

John F. Goense
John F. Goense, was the eldest of twelve children, born to first generation Dutch immigrants, who settled in Grand Rapids. He proudly served during the First World War. He married Theresa (Schmeiser) Goense in May 1925 and welcomed a son in August of 1926.

They lived on the West Side of Grand Rapids, on Pannell Avenue and John worked at the Grand Rapids Packing Company on Bristol Avenue, not far from their home.

The L'Artiste phonograph, now in the Collections of the Grand Rapids Public Museum, was purchased by John for Theresa in the late 1920s. It held a prominent place in their living room and was used frequently for decades. It soothed a mother and small child with gentle, soft music and enlivened every family gathering held at their home. The family was very close and there were many celebrations held at the home and the phonograph was an integral part of the festivities.

The Goense's were active members of St. Anthony's Catholic Church. John's son attended Catholic Church grade school and high school, then continued his education at Aquinas College and the University of Michigan where he earned his electrical engineering degree.

The phonograph remained at the Panell Street home until John F. Goense's passing in 1981. At that time, his son, John, and wife, Rita, brought it to their home in Traverse City and it remained there until our father's passing in 2016. It was the desire of the family to return it to the city of its origin. Due to the historical value and significance, particularly with ties to Michigan and Grand Rapids, the family decided that the donation of the phonograph and associated objects would honor John and Theresa's estate. 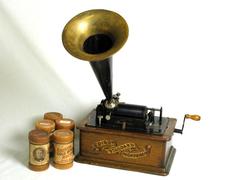 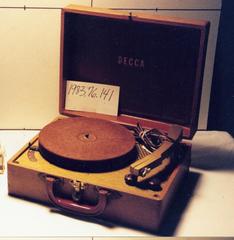 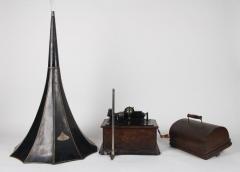 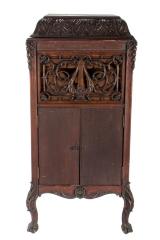