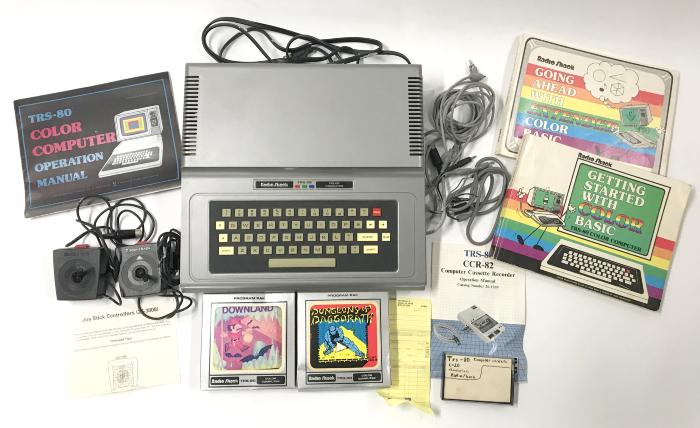 This Radioshack TRS-80 Color Computer, also known as the Tandy Color Computer and nicknamed CoCo, was a home computer from c.1982 that was based on the Motorola 6809 processor. The line was launched in 1980 and was discontinued in 1991. The computer was manufactured together by Tandy and Motorola in an effort to develop a low-cost home computer.

This TRS-80 includes the computer (which does not include a monitor because it would be connected to a television), system operating manual, other Radio Shack manuals such as "Getting Started with Color Basics", and "Going Ahead with Extended Color Basics", set of joysticks and instructions, two computer games: "Downland" and "Dungeons of Daggorath" a cassette tape and instructions for a computer cassette recorder along with cords.

This system was used by the donor, Dr. Mira Krishnan, as a child around c.1982. This was her first computer and her parents, both scientists and interested in computers as well, encouraged her to learn to do computer coding on the Coco.

Can you imagine that the only way to talk to your friend is by letter because the telephone has not been invented? What about telling time not on your wristwatch, but by relying on the position of the sun? Or that there are no computers to type on or emails to send, just a quill and an inkwell?

From technological to medical devices, these artifacts selected by the Grand Rapids Public Museum Middle School students are common everyday artifacts from the GRPM’s Collection that are often overlooked as important inventions. They can inspire us to think about the incredible work done by inventors to solve problems and design devices that have not only made our lives easier - but better!

In the ancient world, the lyceum was where the greatest Greek philosophers taught. The concept of the lyceum was revived by American intellectuals in the 19th century who believed that public education was an important part of our democracy. Founded in 1854, the Grand Rapids Public Museum was originally named the Grand Rapids Lyceum of Natural History. In 2015 the Grand Rapids Public Museum School was founded with many community partners. The Museum School has developed its own version of the lyceum - an innovative after-school program that pairs local experts with middle school learners to exercise their minds and bodies by exploring an eclectic range of topics.