The photo shows a younger looking Herbert Hoover sitting at a desk. The photo was taken by Henri Manuel (April 24, 1874 - September 11, 1947) and is signed in graphite Henri Manuel / Paris. It is also inscribed in inkTo my good friend Major Ferry Heath From Herbert Hoover.

Note: Major Ferry Kimball Heath was a native of Grand Rapids, Michigan, a graduate of the University of Michigan and veteran of the Spanish-American and World Wars.  After the World War he was detailed by Herbert Hoover, then head of the American Relief Mission, to direct the work of the mission in Finland. 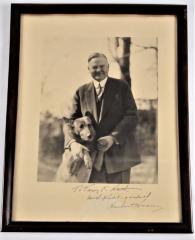