A photograph taken in 1932 by Harris & Ewing and inscribed in ink: To Ferry Heath from his friend Ogden L. Mills

Note: Ogden L. Mills was secretary of the Treasury from February 12, 1932, until March 5, 1933. Under the provisions of the original Federal Reserve Act, the Treasury secretary was ex-officio chairman of the Federal Reserve Board. Mills was born in 1884 in Newport, Rhode Island. He graduated from Harvard University in 1904 and Harvard Law School in 1907. Mills became active in Republican Party politics in New York and was a delegate to the Republican National Conventions in 1912, 1916, and 1920.  He ran unsuccessfully for Congress in 1912 but won election to the New York state senate in 1914. He resigned in 1917 to enlist in the US Army. During World War I, he served as a captain.

DETROIT, Michigan - May 27, 1939 - Ferry K. Heath, Assistant Secretary of the Treasury during the Hooveradministration, died in a Detroit hospital today after a long illness.  He was 62 years old.
Born in Grand Rapids, Michigan, on October 23, 1876, he served as a Major overseas with the 330th Field Artillery during the World War. Mr. Heath became Assistant Treasurer of the Republican National Committee during the Presidential campaign of 1928.  President Hoover appointed him Assistant Secretary of the Treasury in 1929. 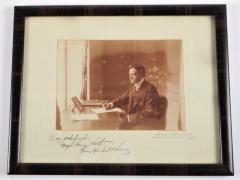