Mercury Friendship 1/24 Scale model. According to NASA's website, the historical significance of this model relates to its use as one of the most important flights in American History on February 20, 1962, Their mission was to send a man to orbit Earth, observe his reactions and return him home safely. The pilot of this historic flight, John Glenn, became a national hero and a symbol of American ambition.

In 1958, John Glenn participated in a series of tests designed to select the first group of astronauts for the newly formed NASA Manned Space Program. Each astronaut candidate, from an original pool of 508, had to meet seven criteria.

They had to be test pilot school graduates in excellent physical shape, less than 40 years old, shorter than 5 feet 11 inches, qualified jet pilots, and they had to have at least 1,500 hours flying time and bachelors’ degrees in engineering. Glenn met all the requirements.

He also had a reputation as one of the best test pilots in the country. In July 1957, he had set a transcontinental speed record by flying from Los Angeles to New York in 3 hours and 23 minutes. It was the first transcontinental flight to average supersonic speed.

In April of 1959, John Glenn was selected as a member of the first group of astronauts, the “Mercury Seven.” He was joined by Scott Carpenter, Gordon Cooper, Gus Grissom, Wally Schirra, Alan Shepard and Deke Slayton.

NASA Glenn’s Multiple Axis Space Test Inertia Facility, or Gimbal Rig, was one of the many facilities where the seven astronauts trained for their missions.

After three years of training, John Glenn rocketed into space aboard the Mercury capsule Friendship 7. He became the third American in space and the first to orbit Earth. The historical flight was no easy feat. At the end of his first orbit, a yaw attitude jet clogged, forcing Glenn to abandon the automatic control system and use the manual electrical fly-by-wire system.

In 4 hours and 56 minutes, John Glenn circled the globe three times, reaching speeds of more than 17,000 miles per hour. The successful mission concluded with a splashdown and recovery in the Atlantic Ocean, 800 miles southeast of Bermuda.

John Glenn instantly became a hero. President John Kennedy awarded him the Space Congressional Medal of Honor. Schools and streets across the country were named after him. And a ticker-tape parade in New York City celebrated his mission.

Discovery Kit: Space Exploration (October 25 2019)
Discovery Kits include a variety of artifacts and specimens from the Museum’s Collection that allow students to investigate global and local objects. The Collections support the Museum’s mission of inspiring curiosity and discovery around science, history, and culture. Each kit includes objects from the Museums archives, helpful resources and suggested activities. Discovery Kits are a great way for teachers to incorporate primary source and object-based learning into the classroom or as a way to prepare for or extend a Museum visit.

Virtual Discovery Kit: Space Exploration (May 2020)
Space, the final frontier! Discover what we know about outer space as well as how astronauts and astronomers explore this infinite universe 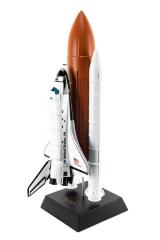