This t-shirt is from the Racial Expressions - Youth in Action summit. On May 10, 2001, the G.R.A.C.E. Racial Justice Institute worked in its first year with local students at Godwin Heights High School to address issues of racism and racist behavior. This summit, called Racial Expressions - Youth in Action was coordinated by the students for their peers. Not only was the youth-driven event revolutionary for Grand Rapids, but it was considered unique in the state and the nation.  The summit aimed to give power to youths, providing them with tools, knowledge, and information on how to teach others - as well as their community to become anti-racist.

Racial Expressions - Youth in Action grew out of several Grand Rapids-area events, groups and the hard work of many individuals. One major inspiration was the Summit on Racism, put on annually since 1999 by the Racial Justice Institute. The organization had been involving youths via its Youth March for Justice but sought to involve them in a more lasting way.

The Racial Justice Institute (RJI)—under the umbrella of Grand Rapids Area Center for Ecumenism (G.R.A.C.E)—was created to mobilize people in the greater Grand Rapids community to promote racial justice and create strategies to address issues of racial injustice before they arose.

In 1997, Rev. David May, whose long history of community activism includes founding in 1989 the MLK Day Celebration that is now held annually at GRCC, was hired by G.R.A.C.E. to lead RJI. David Baak, the Executive Director of G.R.A.C.E., provided unwavering support to May and community members who put RJI’s mission into action. Initially, the work of RJI was informed by the 1996 Citizen’s League Report, in which community members identified the need for a central organization to develop a five-year strategic plan concerning racial justice. The Report called for the strategic plan to include an annual forum, which would convene a broad spectrum of community members and focus on dismantling racism. In response, RJI organized and convened the Annual Summit on Racism. Using the word “Racism” in the Summit’s name drew strong pushback, but Rev. May was adamant that for the Summit to address the issue of racism, it must be accurately named.

The first Annual Summit on Racism was held on April 16, 1999 at Calvin College. The Summits drew an average of more than 700 participants from the greater Grand Rapids area. Participants committed anti-racism work in one of six sector groups—Business, Community, Education, Government, Media, and Religion—and to give a progress report on their work at the following year’s Summit. During the same time RJI partnered with area schools and other community groups to organize a Youth March for Justice and a recurring youth conference, which was modeled after the adult Summit.

The first youth conference, called Racial Expressions - Youth in Action (REYA), was held at Godwin Heights High School in 2000. REYA brought hundreds of students from Kent and Ottawa counties together to grapple with issues of racism. Students developed strategic plans that they implemented in their schools throughout the year, and they reported on their work at REYA the following year. As with all the RJI’s programs, REYA organizers focused on bringing together a group of people who were racially, ethnically, and socio-economically diverse.

The Summit on Racism became a model for other communities across the United States, and RJI developed a Youth Institute curriculum, housed at Kent Intermediate School District (KISD), to guide others who might be interested in these convening. In May and Baak—often referred to as the “two David’s,” one black and one white—facilitated hundreds of Faith-based Institutes for Healing Racism and to train other facilitators. (Additional historical details can be found at the Grand Rapids Public Library)

In 2007, participants of the Summit on Racism proposed a new concept, which would eventually become its own organization: Partners for a Racism-Free Community (PRFC). In keeping with the model of the Summit on Racism, the participants’ goal was for PRFC to promote the work of committed citizens and organizations to overcome the racial divide in the Grand Rapids area. Faye Richardson who worked closely with May since the inception of RJI, went on to lead PRFC and a team of diverse volunteers in creating an assessment and credentialing process, which helps organizations examine their behaviors in six target areas with the goal of creating racism-free workplaces. Richardson’s team defined racism-free as “the individual and systemic condition achieved when all persons, regardless of skin color, feel welcomed and wanted in all places and treat others the same way.” It took three years for the team to write the standards and test them with six pilot organizations. During that time Lisa Mitchell who had worked for GRACE, became the Executive Director for PRFC. In 2010, at the annual Partners for a Racism-Free Community Forum, PRFC awarded a “partner” designation to the first four organizations to engage in the assessment and credentialing program. To date, PRFC has engaged over fifty organizations in the process and has been a resource for hundreds of individuals and organizations who have worked to intentionally addressing racism. In 2013, PRFC became a 501(c)(3) and has continued working to address racism in the community. A few years later Melvene Tardy and Breannah Alexander were hired to assist with programing. In 2016 Faye Richardson, PRFC’s Board President, stepped in as Executive Director. PRFC is now housed at the YWCA. Sharon LaChappelle is leading a process to preserve two decades of organizational history and determine next steps for the next iteration of PRFC’s racial justice and equity work.

For additional details on organizations and events discussed above, and the people who have been involved with them, please visit the History Department of the Grand Rapids Public Library. If you have a piece of history to offer or would like to be interviewed for the RJI/PRFC Oral History Project, please contact Sharon LaChappelle at slachappelle-prfc@ywcawcmi.org. 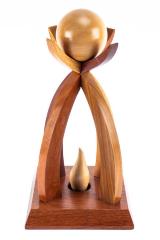 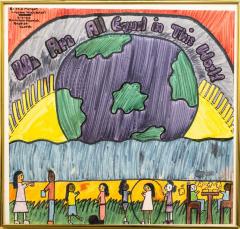 Framed Artwork, "We Are All Equal in this World"