This creative kokeshi has a round head with painted-on hair. It has a narrow neck and dark rings around the base. A seal of Japanese on the underside translates to "Kano Chiyomatsu" who was the artist and it is accompanied by its box.

Kokeshi are wooden dolls lacking arms or legs that were first produced in the Tohuku region of Japan. They were originally intended to be used as children's toys however they have become popular among collectors and are often used as decoration. Kokeshi can be categorized into two groups, traditional and creative. Traditional dolls are simple in design and are divided into eleven different types that coincide with the area they were created. These types have particular shapes and designs to help distinguish them. Creative kokeshi were first produced after World War II and feature unique designs, shapes, and colors that are not found in their traditional counterparts.

Etta M. Hesselink
Etta Hesselink and her husband John served the Reformed Church as missionaries and teachers in Japan from 1953 to 1973, and they and their five children all developed a deep appreciation for Japanese art and culture.

Kano Chiyomatsu
Kano Chiyomatsu (狩野 千代松) was born in 1935 and began making kokeshi in the 1950s. He won many awards for his creations. 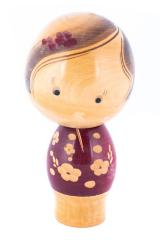 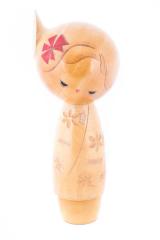