The Hamilton Reef (also known as “The Rock Pile”) is the first artificial, freshwater reef in North America.  Located in Lake Michigan, near Muskegon, about 3/4th a mile south of the mouth of the Muskegon River channel.

The reef was built in August and September of 1980 and is a lazy “S” shape, 1,200 feet long and 5 feet high.  It sits in about 30 feet of water and is composed of 4,000 tons of limestone that was barged in from Manitowoc, Wisconsin.

The reef was created to increase habitat for fish and enhance the sport fishing in the area.  It is named after Thomas Edwin Hamilton, who’s personal effort resulted in its creation.

The Hamilton reef is part of the West Michigan Underwater Preserve, which extends along the western shore of Lake Michigan from Port Sheldon to Pentwater.

In memory of Thomas Hamilton (father) and the Hamilton Reef.

Tom Graduated from Muskegon Community College with an associate degree and Michigan State University with two bachelor’s degrees. Tom retired from U.S. Fish & Wildlife in Ludington as a Fish Biologist. He then also worked as a Custodian at Fremont Public Schools.

In 1980 he put together an artificial fishing reef near the Muskegon Channel & Lake Michigan and is one of the founders of the White Lake Area Sports Fishing Association. He has wrote and helped with many grants to better the community, including the Handicap Fishing Bridge over the White River at Covell Park in Whitehall. 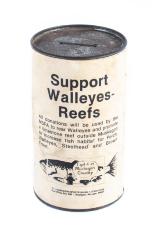