A framed, hand-colored lithograph titled The Little Brothers, published by E B. and E.C. Kellogg of 245 Main Street, Hartford, Conn.

Elijah Chapman Kellogg (1811-1881), partner with his brother Edmund in the successor firm of E.B. & E.C. Kellogg from 1842 onward. From about 1830 through the rest of the century, the Kellogg brothers, in various partnerships among themselves and with others, published popular lithographs in Hartford, Connecticut. These firms issued the second largest number of decorative prints intended for the American public, surpassed only by their New York rivals, Currier & Ives, producing thousands of lithographs, most hand-colored, which ended up in the homes and work places of Americans. The Kelloggs' prints were typical of the popular print style: colorful, affordable and with images covering much the same range of topics as those of their New York counterpart. Subjects included portraits, historical events, scenes of daily life, views, religious themes, politics, sports, animals, sentimental images and any other topic that might be of interest to the American public. This lithograph was likely produced during the American Civil War era or slightly afterward as the smaller of the two brothers is seen holding a military-style Kepi hat that was so polpular at the time. This print originally bore the printed identifying number 154. The number has been trimmed off. 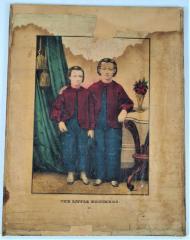 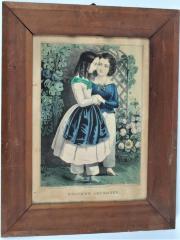 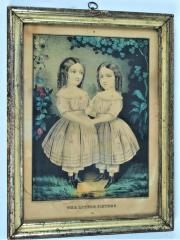 Hand-colored Lithograph, The Little Sisters, by E B. and E.C. Kellogg 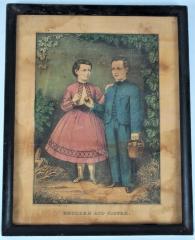