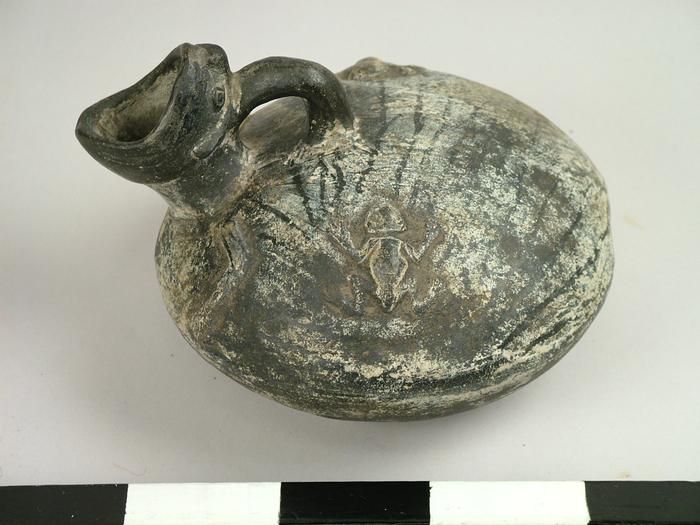 Blackware pot with low, wide body, single handle, and neck in the shape of an animal's open mouth. Two lizards or monkeys decorate the sides.;This piece, as with the others in the Public Museum's collections, is almost certainly authentic. Very few fakes of Chimu pottery are made: authentic pieces are widely available, and the culture is not known for its ceramics artistry. Identified by Virginia Miller, Professor of Art History, Department of Art History, University of Illinois Chicago, IL; tel: 312.413.2467;The Chimu culture dominated northern Peru from about 1000 AD until 1470 AD, when they were finally defeated by the Inca. Their capital, Chan Chan, is the largest pre-Columbian urban center in Peru, and was built of large adobe compounds divided into ten major quadrangles. Each quadrangle had its own gardens, markets, reservoirs, workshops, cemeteries, storage centers, and pyramids. The city itself was not fortified; rather, a series of border fortresses protected the empire. Chimu pottery was mass-produced in molds, and then fired black by smothering the kiln's flames to reduce the amount of oxygen present. The black pottery was then polished to a slightly silvery finish. Molds were also used to make relief and other decorations on ceramics, of which monkeys--as on this example--were one popular motif. Metalwork was also mass-manufactured using molds, although most pieces reflected more individualistic design than did Chimu ceramics; the culture is recognized especially for its goldwork.