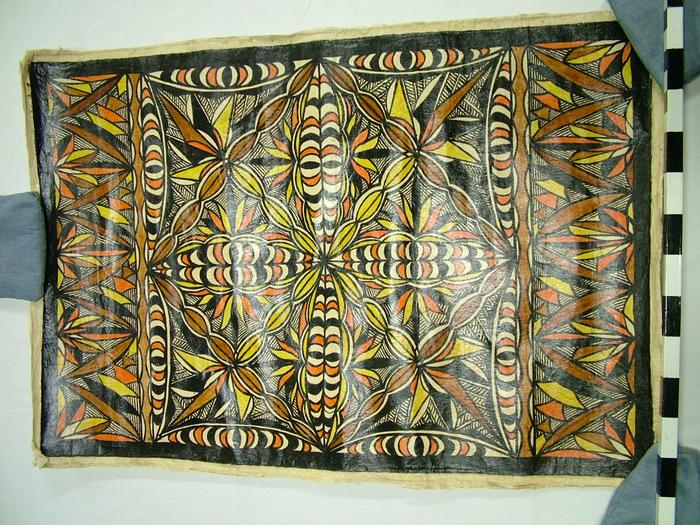 This siapo--or Samoan tapa cloth--was made by Mary Pritchard (born Mary Jewett, in 1905), a Samoan artist and master of mamanu, or freehand decoration. She designed her first siapo in 1929, and gradually expanded her work into a large business that gathered tapa from surrounding islands and exported them. While that business declined somewhat as new trade regulations were put in place after World War II, Pritchard continued making highly-regarded siapo and teaching others the art until her death in 1992. A specialist in mamanu, she helped redefine siapo as art in itself, as well as broke down traditional stereotypes by instructing boys as well as girls. She is especially well-known for her innovative style, which included using smaller individual designs to make a more complex whole; permanently fixing her works to boards to preserve them (beginning about 1970); and adding a clear polymer topcoat to add sheen to her siapo. Pritchard also continued the tradition of using multiple colors in a single siapo design, which was pioneered by Kolone Leoso (1900-1970), her teacher. This siapo mamanu, probably made sometime in the 1960s, is a good example of these characteristics.