This top hat is made of black silk plush, also known as hatter's plush. It has a black grosgrain ribbon around the base of the crown and is roughly 14.5 centimeters tall. The silk plush is treated with shellac which helps to waterproof the hat. This hat was made by Dunlap & Company and has the name Earle written on the sides of the interior crown. 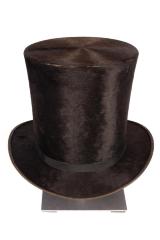 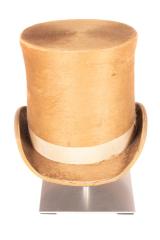