Capt. S.R. Reynolds
A Adjt Genl
Sir
I have the honor to report to you the following Ordnance Stores that have been captured .
(2) Two Springfield Rifle Muskets
(4) Four Percussion "
(5) Five Muskets altered to percussion.
(6) Six Flint Locks
(1) One rifle musket cut down for saber bayonet
(4) Four fowling pieces
Which if agreable would like to get an order to turn over to Ordnance Depot.
Very Respectfully
Your Servant and Lieut
P.K. Delaney
R QM 118th Regt
N.Y. Vols

135419 1/30
Head Quarters 118th Regt N.Y. Vols
Yorktown VA April 24th 1864
Lieut S.R. Morgan
Actg. Ord Officer
Lieutenant
I have the honor to report the number & Calibre of Small Arms & the number of rounds of ammunition on hand in the command as follows

Lieut Commander James Parker commanding USS Maumee is hereby authorized to take possession of all Naval Stores and all Naval Ordnance now at the Naval Ordnance Depots and Laboratory in the city (This not to include any Ordnance in any of the various defences or that may have been brought there by the U.S. forces) of all Naval Machinery at the Navy Yards, and Naval machine shops, whether completed or in the process of construction of all ship timber at he Navy Yard.
The above permit includes all articles and only such articles as were the property of the rebel navy department.
All guards are hereby directed to afford all proper facilities.
The Machinery, materials, buildings & c. pertaining to and at the  Tredegar Works are not included in this connection and will be turned over by the Q.M. Dept. only to such Officer of the ordnance Dept as may be assigned to receive them, all such property as is now in use by the Army is also excepted  from the above.
Lt Col Howard will assign some careful officer of the Quartermaster Dept. to examine the articles claimed as pertaining to the rebel navy and be satisfied that the claim is well founded and the articles not required for the Army before turning it over, and will take the necessary receipts for every article so turned over.
In case of disagreement between the officer of the Quartermaster Department so assigned to turn over and Capt. Parker the matter will be referred to the Department Commander for his action.
E.O.C. Ord
Maj Genl Comdg

Lieut Henry J. Northrup
Actg Asst Q Master
Lieutenant
By order of the Major General Commanding, Lieutenant Commander James Parker U.S. Steamer Maumee is authorized to take possession of all Naval Stores and Naval Ordnance now at the Naval Ordnance Depots and Laboratory as also all articles pertaining to the Navy.
You are hereby assigned to examine the articles claimed by the U.S. Navy as formerly belonging to the rebel Naval Dept and to turn over the same to Lieut Commander Parker of the USS Maumee. Before turning over any of the said stores you must be satisfied that the claim is well founded, and the articles not required for the army, and take the necessary receipts for the stores thus turned over. The articles thus to be turned over include all Naval Stores and Naval Ordnance now at the Ordnance Depots and Laboratory in this city, all Naval Machinery at the Navy Yards and Naval machine shops, whether in process of construction or complete, and all ship timber at the Navy Yard.
This order is not to include any Ordnance in any of the various defenses or that may have been brought there from /by any of the United States Forces, nor any of the buildings, machinery, and material belonging to the Tredegar Iron Works.
In case of disagreement between you and Capt. Parker in regard to the claim of the Navy to any of the said Stores, the matter will be referred through this office to the Department Commander for his action.
John B. Howard
Lt Col Chief Q Master Army of the James 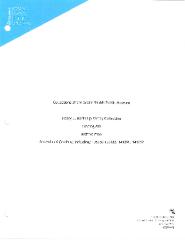