This artifact consists of a. safe, b. wheel set, c. large key, d. small key, e. nail head. The safe itself is made of metal lattice work covered with a series of knobs, giving it a very formidable appearance.

This safe was made in New York City by Jesse Delano after 1825. It was brought to Grand Rapids by Rix Robinson, the first white settler in the area, and used at his trading post at Ada in 1827. The museum also posses a signed affidavit, stating that after Rix Robinson's death the safe was given by his son John R. Robinson to William H. Smith of Ada. Smith then gave the safe to Asa Dennison, who originally loaned the item Museum in 1917, and converted the loan into a gift by paying the Museum 24 half dollars in 1921.

Rix Robinson
Rix Robinson came to the mouth of the Thornapple River in 1821 as a representative of the American Fur Company. He purchased the stock and outfit of Madame Laframboise and established a very successful trading post. Renowned in the through the region throughout the region for his success in treating with the Indians, Robinson expanded his base to include a post at Grand Haven along the Lake Michigan shore. Part of his success could have been related to the fact that he married the sister of Ma-ob-binna-kiz-hick (Hazy Cloud), a Native American chief in the Ada region. She remained his companion until his death in1875, at age 86 years old.

Grand Rapids historian Albert Baxter described Robinson: “He was an educated man, the first permanent white settler in Kent County, and after abandoning the for trade, which she did and turned his attention to firming in the domestic matters, he served honorably in several public positions. He was a man of commanding presence; tall, dignified and independent in bearing and it was side of him that no white man in Michigan had more positive influence with the Native Americans; be not only love you respected but student off of him. He left a memory to be cherished and then arena by both races. Dallas is treating boats, between 1821 in 1833, past every year up-and-down this river. A monument to his memory was erected in June, 1887. (Source: Baxter, Albert. History of the City of Grand Rapids. New York in Grand Rapids: Munsell and Company, 1891.) 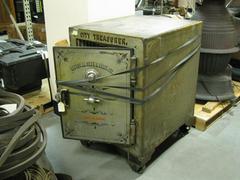