This military green dress is made of silk or rayon and has a V-neckline decorated with white crepe and loop trim. The sleeves are long and narrow with black loop trim on the cuffs as well as covered buttons. The skirt has two tiers that are trimmed with black loops. Features that are indicative of the late 1920s are the short hem, the V-neckline, the long sleeves, and the slightly narrow waist.

Hattie Carnegie Inc.
Hattie Carnegie was a famous fashion entrepreneur from New York City from the 1920s to the 1960s. She was born in Austria-Hungary and emigrated with her family to the United States. In 1909 she opened a hat-making business with Rose Roth who was a dressmaker. That was the beginning of Hattie Carnegie, Inc. 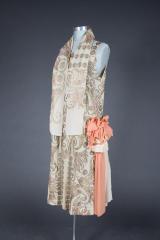 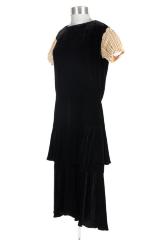 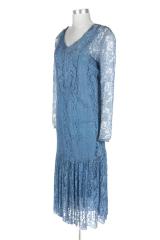